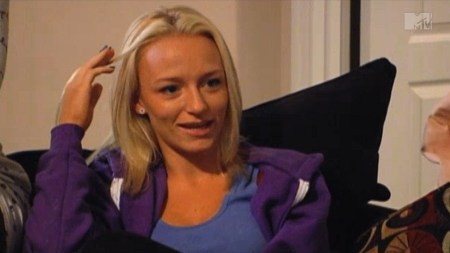 Tonight on MTV is an all new episode of Teen Mom. On tonight’s show Exes are going on vacation together and that cannot be a good idea!. If you missed last week’s season 4 premiere show, we have a full and detailed recap here for you.

On last week’s show Amber Portwood prepared to go to rehab; Maci enrolled Bentley in day care; Catelynn and Tyler celebrated Carly’s second birthday; and Farrah has a change of heart about leaving Sophia behind when she moves.

Catelynn and Tyler have an emotional visit with their daughter, Carly; Amber misses her daughter, Leah, during her first weeks of rehab; Farrah says good-bye to her life in Iowa; and a disagreement with Ryan disrupts Maci and Kyle’s relationship.

On tonight’s show exes vacationing together that sounds like a disaster? Can’t be a good idea right, especially for Maci Bookout and Ryan Edwards.  And double especially because he’s bringing his new girlfriend along!

Ryan and Maci get into an argument and Maci says that she doesn’t want to talk to him anymore. The new girlfriend says from the backseat of a car, “Good!”

Tonight’s episode is going to be a drama filled episode that you won’t want to miss, so be sure to tune in for our live coverage MTV’s Teen Mom at 10 PM EST!  While you wait for our recap hit the comments and let us know what you think of Teen Mom season 4, so far!

Farrah is trying to get her college courses all squared away, while at the same time trying to find a nanny for her daughter. Her mom is stressing her out, telling her that there are lots of sex offenders in Farrah’s new neighborhood. She says she’s so sick of her parents acting like she can’t take care of Sophia. Simply put, she just wishes that they’d get of her back already!

Kyle is leaving for the morning, and Bentley is being taken to Ryans for his trip. Maci takes Bentley to Ryan’s house. Maci also asks if she can go down to the beach the same weekend as well. Ryan’s parents say that she’s more than welcome, but Ryan’s mother wants Maci to know that his new girlfriend, Dallas, will also be there.

Meanwhile, Amber is in rehab, and she’s not sure if her daughter will be able to accompany Gary to the facility. She meets with her rehab counselor — they talk about the end results: what Amber hopes to achieve, etc. before her time ends there at the facility. They call her brother and ask him if he might be able to help Amber recall some of the important moments in her life.

Now that Farrah is all moved in, her dad is getting ready to head back home. Her daughter says goodbye to her grandpa and then the two go to the pet store. Farrah decides that she really wants a dog.

Catelynn is getting ready to graduate and she has a heart-to-heart with her Mom, who just wants her to know that she loves and appreciates her. She says that she has lots of regret — for not being a better mother, etc. Catelynn says that she and her mother had a rough relationship, but that it also means a lot that she’s proud of her.

Catelynn talks to Tyler about how happy her mother was of her. Tyler tells her that “they did it” and that the world is now their stage — wide open for them to explore and help out all of the kids. She says that she’s excited to to go to college and, eventually, get married. But Tyler says that she has a good head on her shoulders . . . she wants to wait.

Meanwhile, back at rehab, Amber gets a phone call from Gary. Gary tells her that Leah is really stressing him out. He tells her that he and Leah will be traveling to visit her. Amber is still terrified that her daughter will forget about her. She’s so relieved that they are both coming, but she’s worried about how her and Gary’s encounter is going to turn out.

Farrah is in her apartment with her daughter and the new lil’ puppy she bought. She phones her sister to chat with her. She says that Mike (her step dad) was so annoying and made her extremely uncomfortable. Sophia loves the new dog, and Farrah tells her sister that she got a french bulldog. As the dog pees, she knows that Sophia and her will be happy on her own.

Meanwhile, Catelynn gets ready for graduation. She’s excited to “get life rolling.” We see footage of the graduation ceremony before cutting to a montage of Maci, Farrah, the bulldog, Gary and Leah, and Amber.

Well, that’s all we’ve got for tonight’s episode! Come back here next week for another live update!