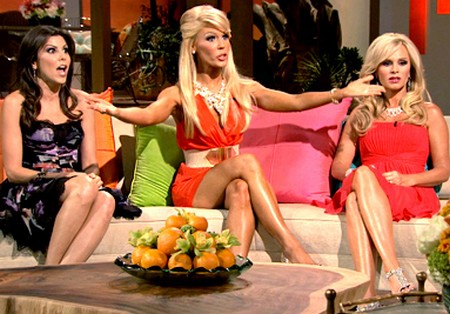 Tonight on Bravo is an all new episode of the Real Housewives of New Jersey called “Reunion Part 1”. On tonight’s The ladies reunite with Alexis demanding an apology for the Costa Rica kerfuffle. If you missed the season finale there is a full and detailed recap HERE for you!

When the season ended we saw the ultimate “Battle Royal” between……Vicki and Tamra.   They was a lot of drama at Heather’s first luxury bash. Some really bizarre conduct forced Heather to step forward and take action. One of the husband crashed the bash and confronted another husband on the spot.

On tonight’s show the Orange County ladies reunite with Andy Cohen to hash out the most dramatic season to date! Alexis demands an apology from the ladies for calling her phony, and the girls fight right back with specific examples of her insincerity. Surprisingly, it’s a past enemy Vicky who comes to Alexis’ defense…

Meanwhile, Gretchen accuses Vicki of being a hypocrite regarding her relationship with Brooks, leaving Vicki feeling backed into a corner with almost no support.

Tonight’s episode is going to be filled with the usual Housewife drama and you won’t want to miss it, so be sure to tune in for our live coverage of the show tonight at 9 PM EST! While you wait for our recap hit the comments and let us know what you thought of “The Real Housewives of Orange County” season 7! Also we have a sneak peek video of tonight’s show below!