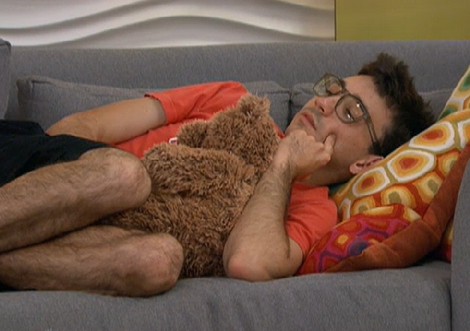 On Big Brother 14 Week 7 Episode 22 ‘Live Eviction’ this week, after Dan Gheesling spent the week flipping the house upside down, Ian Terry spent his time “flipping the bird”. Yep, Dan’s evil plan played out perfectly when Jenn Aroyo used the Power of Veto on him and Frank Eudy put Britney Haynes up in his place. Ian did not use his golden Power of Veto, leaving Britney wide open for eviction last night and, she was evicted!

Ian came into this show as a geeky kid that everyone loved, but then, he got a little taste of power and it all went straight to his head. Everything was going according to Ian’s plan, until the power shifted in the house and his alliance, the Quack Pack, was blindsided by Dan.

Ian bashed Frank’s game, spewed insults and flipped the bird several times behind Frank’s back for all of America to see on camera. His life line in the house was pretty fragile as it is, but then he goes and does something even dumber when he  makes a comment about 9/11 on the live feeds.

Ian went on about how much he loved Big Brother and said that, “I’ve been waiting to get on Big Brother before the planes hit the towers”. Hold on, how do you spell dumb? IAN.

With that dumb comment, Ian knew he screwed up and tried to fix it by saying it was just an historical reference. While most of the houseguests found his comment weird, Jenn was upset because she lived in NY at the time. Well, too bad so sad for Ian, the obnoxious little brat has pushed the house to the limit and if he doesn’t win HOH, I am certain that he will be on the block and heading to the jury house with Britney. Hasta La Vista Quack Pack!