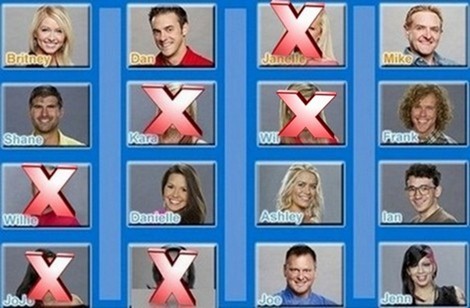 Tonight is another new episode of Big Brother 14 on CBS. Tonight we will get to see who the next house guest is to be evicted – remember last week Boogie and Ashley were evicted.  Tonight is going to be an action packed night, because of the brilliant move Dan made last night showing he is the one of best players we have ever seen on Big Brother.

On the block tonight is Britney and Danielle and one of them is going home.  Can Dan save Danielle, we will find out tonight. We will also have another HoH competition.  If you missed the last episode (PoV competition), you can read our full and detailed recap here for you.

On last night’s PoV meeting Ian first chose not to use his PoV, then Jenn used hers and took Dan off the block. Frank then told Ian that he would have put him up on the block, but since he could not be nominated, the next best thing was his biggest ally, Britney. What an awesome move, Dan’s plan worked, 24 hours ago he was a dead man and now he is off the block. What an amazing show, this is what Big Brother is all about.

On tonight’s show someone is going home either Britney or Danielle.  Dan’s player Danielle is on the block and Dan is trying to save her from eviction.  We don’t know yet who is going home, but Britney has not done much so far to save herself.  At one point during the live feeds she said she does not want to campaign against Danielle – so my guess is Britney is going home, but this is BB and you never know.

Tonight’s episode: Is Dan the best Big Brother player in the show’s history, me and most of America think so after his brave move in the last episode when he blew up the Quack Pack by getting Jenn to take him off the block and Britney put up as a replacement.

It’s day 55, Dan is safe, Britney is on the block and the entire house is left stunned by Dan’s bold move.  After the last Veto meeting, Ian had a sneaky suspicion that Frank knew he was playing two sides. Ian heads right up to the HOH room and starts to question Frank about what he did and when Ian starts to raise his voice, Frank tells him to leave the room.

Shane thinks he is in the worse case scenario in having to vote out either Danielle or Britney.

Britney goes in to see Frank and pretends that she had nothing to do with his ever going on the block, she starts to pour on the tears to get their sympathy and tells hi that she’ll help him if he keeps her.

Frank and Ian start to get into it and Frank tells him off for voting Boogie out, Ian claims he cried all day when he did it, so what, does that mean it doesn’t count then? Wow, this is certainly a different side of Ian, Dr. Jekyll and Mr. Hyde, he’s seen repeatedly flipping the bird to Frank, but of course the little weasel is doing behind Frank’s back.

Britney is outside and makes fun of Dan’s funeral, then reminds everyone that Dan has already won the game. Shane and are talking about who they are going to send home tonight, it appears that Shane is going to be the deciding vote.

It’s time for the HOH competition is called “Hold On To Your Sun”, the first house guest to fall will find a punishment in a box, although the house guests think it could be a reward or a punishment. Everyone is hanging from ropes with their feet on a disc, it’s an endurance competition and starts with spraying the with yellow paint while they go round and round.

That’s it for tonight, BB is making us wait for Saturday to find out who wins the HOH.