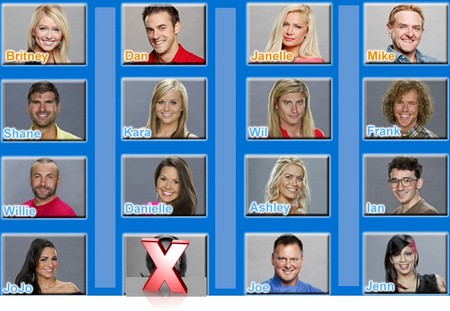 Tonight is another new episode of Big Brother 14 on CBS. Tonight we will see the first live elimination of season14 and either Frank or Kara will be evicted. I have no idea who they are going to evict from the house tonight, the house guests keeping going round and round about it. If you missed last week’s episode you can read our full and detailed recap here.

On last night’s episode there was a lot of footage of Britney, Boogie, Janelle and Dan.  Boogie figures out the blonds are working together and he is less than pleased.  He arrogantly thinks he can intimidate the girls, but it really looks like Boogie is failing.

Shane won the PoV and the nominated houseguests, Kara and Frank tried their best to convince Shane to use his Power of Veto.  Both of them promised him just about anything if he would save them.  At the end of the day, Shane decided not to use the PoV.  He tells them both he has to do what is in his best interest.

After the PoV ceremony Kara said she does not want to go and she is going to fight to stay.  Frank realized he is going to have to campaign against Kara.  Both Dan and Bookie were confident they are going save their players.  Who will actually go tonight I have no idea, there has been so much back and forth.

On tonight’s show it is the first live eviction of season 14 and it will be followed by a new HoH competition.  It seems that tonight a light comes on in Boogie’s head.  He realize if he cannot sway tonight’s vote or unless the person he wants wins Head of Household he is in big trouble.

Tune in tonight, our wait is over and another exciting and drama filled Big Brother is airing on CBS and you won’t want to miss it. So be sure to bookmark this spot, and come back for our live coverage of CBS’s Big Brother Week 4  Live Eviction at 8:00 PM EST! While you wait for our recap hit the comments and let us know what you think of  Big Brother 14 so far.

Tonight’s recap: Shane is hoping that his decision has shown Willie that he is a good person to take to the end.  Frank thinks that Willie is the key to staying in the house.  Willie tells Frank he is safe as long as he does not start talking.  Franks tells Willie if he gets him the votes, that proves that Willie wants to work with him.

Willie thinks it would be a good idea to keep Frank.  Britney, Janelle and Willie and the rest of their alliance talk about who they should send home.  Willie tells everyone the problem with Kara is she will put them up next week if Dan tells her because Kara listens to Dan.

Janelle is worried if Kara goes home Dan will go for her.  Janelle goes to see Dan and tells him that the rest of the house is stupid and they are going to get rid of Kara (snake) Britney sees Janelle talking to Dan a lot and she is suspicious.

Britney asks Willie to talk to her.  Britney tells Willie that she believes the coaches are going to come into the game and start playing.  She is calculating and she thinks there are two extra weeks and the coaches will be put back in.  Britney suspects they will be told tonight at the elimination.

The three coaches Britney, Dan and Janelle are sitting downstairs and they are worried where Boogie is.  They are suspicious, meanwhile, Boogie is sleeping.  Willie tells the other house guests that perhaps the coaches will be put in the house and no one is very pleased.

Frank felt better about his chances before the House meeting, he goes to see Willie to reassure himself.  Britney comes in too talk.  Frank is really worried the meeting made his chances worse.

Joe tells Frank that Willie is intending to split the vote.  Frank then decides to get even and tells Joe that Willie was making fun of Wil.  Joe was not happy and headed directly to Wil and told him.  Wil was upset he says he plans to get even.

Boogie asks Willie since when is he the boss of the house.  Boogies asks the house guests if they are going to let Willie bully them.

Julie Chen says hello to the house guests.  Julie asks Jo Jo what is the mood.  She says, “A little weird, a little tension.”  Will has to give one word to decribe the past 18 days, he replies, “Oh, Goodness”  Ashley says, “Loosey Goosey.”

Willie gives one word to describe his rein as HoH, Willie says “pressure”

Each of the nominees have one last chance to plead their case and they do…Frank starts first and tries to pull the “bully” card and tells everyone no one should bully them.  Kara reminds everyone that they are not playing for a team they are playing individual.

The house guest leaving the house is KARA!  She must leave the house immediately.

Kara goes out to see Julie – Julie thinks that Kara has avoided all the drama and even though she did she is eliminated tonight.  Kara thinks it is because her couch was Dan and people are threatened by her.  Kara gets to see the goodbye messages that people left for her.

BBTV Special Report for the house guests – they keep getting woken up all  night for a short clip to see a burglar and he is doing all kinds of things.  This goes on all night.

The Power is now up for grabs.  Tonight’s competition is called Big Brother Break-in.  They will be asked a series of questions based on what the burglar did.

Shane is the first out of the competition

Everyone is eliminated except Will and Frank.

Julie tells up, up next it is time to throw a wrinkle into the coaches game.   Julie tells the Coaches this week they are raising the stakes in the competition.  The Coach who wins the coaches competition this week will be eligible to trade a team member.