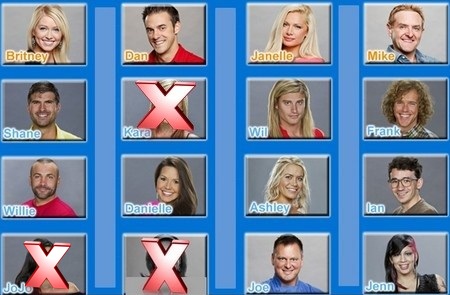 Tonight is another new episode of Big Brother 14 on CBS. Tonight we will get to see who the next house guest is to be evicted. If you missed the last episode, you can read our full and detailed recap here for you.

On the last episode Shane shook the game up a notch by breaking his alliance with Frank and putting him up on the block after Shane won the Power of Veto and removed Ashley.  Meanwhile, Boogie thought he had control of the game with Frank in his pocket but with Shane making this bold move Frank just may be going home and Boogie may be in trouble.

The house is shocked by what Shane did because it is not often in Big Brother that someone makes a big move like this.  Right now Shane is pretty confident because he is winning all the competitions.  Shane better watch out his luck holds because once it doesn’t Boogie is coming after him with a vengeance.

On tonight’s show there is another live eviction and either Joe or Frank will be sent out of the house.  If I was predicting I would say Frank is headed out tonight, but you never know!  We will also find out if the coaches are coming back in the game.  Of course as usual tonight’s live eviction will be followed by a Head of Household competition.  I am expecting huge things to happen tonight!

And here is tonight’s LIVE RECAP:

Last night we saw Shane win the Power of Veto on top of already being head of household.  As it stands right now, Frank and Joe are up for eviction tonight.  Boogie is freaking out because he believes that Frank is the target tonight, which in fact, he is, but Britney and others give him a false sense of safety.  Boogie, Ian and Frank are quietly trying to game plan and hope for the best.

Janelle tells Will that she is all that is kept him from being on the chopping block this week. Huh?  Obviously she’s trying to push him to actually PLAY the game. Janelle is going to great lengths to make sure Will votes out Frank, including fake tears.  Luckily, Will knows it’s all fake and he decides to act right along with her.

Frank’s dad pops up in video and he’s a wrestler known as “sid vicious”.  He thinks Frank is tough but Frank says the two aren’t that tight. They are almost too much alike according to his mother.  She also claims that Frank would be stunned to know how invested his father is in the show.

America has had an opportunity to vote to select whether or not the coaches can re-enter the game rather than just direct their teams.  This possibility is one of the first twists in this season and Britney has walked around predicting that it’ll happen.  Julie finally explains that before the live vote and eviction, they’ll learn if America wants the coaches to play the game as competitors.  Of course, they will have a chance to give up coaching in order to compete. If they want in then there is no eviction tonight.  The coaches enter the diary room and if even one wants to play the game all of the coaches will be back in.  Britney goes first and hits the reset button so the coaches are all playing.

The contestants head outside to the backyard for a new Head of Household competition.  Everyone is standing on a tiny plank above water. The last houseguest standing is the new HOH.  We’ll have to wait til the next episode to find out who wins!

See you here for our next AWESOME LIVE RECAP!