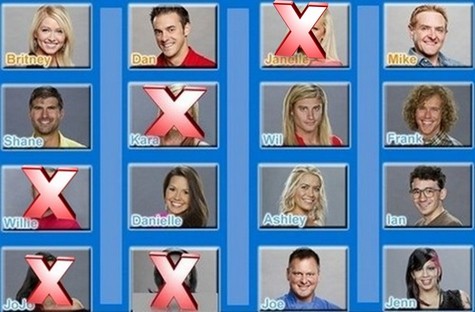 Tonight is another new episode of Big Brother 14 on CBS. Tonight we will get to see who the next house guest is to be evicted – remember last week Janelle was evicted.  We will also have another HoH competition.  If you missed the last episode (POV competition), you can read our full and detailed recap here for you.

On the last episode Zingbot was back and threw a bunch of insults at the house guests which they all take in good humour except for Danielle whose zing was the worse, “Shane is going to give Danielle a gift when the show is over, a restraining order”, hilarious but Danielle didn’t think so.

At the Veto competition, the players were Frank, Jenn, Joe, Ashley, Wil, Boogie and Shane. Ian was the host of the competition and the players had to bring Zingbots baby to life to win the golden POV. Frank was the winner which made Dan extremely nervous that was going to get backdoored. In the end, Frank followed Boogie’s suggestion to leave the nominations the way they are and not use the POV.

Once the elimination is over tonight it will be on to the next HoH competition.  Frank better watch his back, with all that power in the last week the rest of the house guests will no doubt be looking to get rid of him since he is clearly a strong player.

Big Brother airs tonight at 9:00pm with the live eviction, we will be live blogging the show with all the up-to-the-minute details so make sure to come back to Celeb Dirty Laundry and watch the show with us. Can’t wait to see who is going home and if there will be any more drama in the house, how about you?

Tonight’s episode: We’re half way through a summer of twists, back stabbing and backdooring and there’s more on it’s way tonight.

Frank didn’t use the POV in the last episode because he was just too afraid of rocking the boat too much.  Meanwhile, Joe is giving it everything he’s got not to go home this week.  Britney is thrilled that Dan wasn’t backdoored, she believes the “silent six” are still strong.

Dan tells Frank that he really appreciates that he didn’t put him up, Frank makes a mistake and tells him that it’s not like the thought didn’t cross his mind which lets Dan know that he seriously can’t trust him if he was thinking of getting rid of him.

Ashley asks Frank on an ice cream date and Ian is a little jealous as he feels she should have asked him. During their date, Frank asks Ashley to make out on the couch and she jumps in and says yes.  Meanwhile, Britney is alone with Ian and tells him to consider himself dumped.

Big Brother 11’s fan favourite, Jeff Schroeder is back! He’s played the game twice and would love to go back in, but unfortunately, that is not why he is on the show tonight. In his personal life, he is still with Jordan, things are going well and there is a deadline of June 5th, 2013 for him to put a ring on her finger. Regarding the game, Jeff says the biggest shocker is that Janelle got sent home early in the game. His favourite to win the game is Ian. Jeff will be interviewing tonight’s evicted house guest on CBS.com and that is the only reason is on the show tonight, too bad, it would have been nice to see him go in the house and shake things up.

It’s time for the HOH competition and this one is called “swamped”. Houseguests have to fill a jar with liquid, but here’s the twist, there are two temptations; there is also a jar labelled $10k and another one that is labelled “safety”. Houseguests can choose to fill the HOH jar, the 10k jar or the safety jar. Personally I would fill the safety one, it is the smallest jar and it saves them from being nominated. The path to the jar is very slippery; it’s definitely an endurance competition. Boogie is going for the cash prize, four are going for HOH and four are going for safety. That’s it for tonight, they are not going to show us who won until Sunday night.

Next Thursday there will be a live double eviction, week six of Big Brother is going to be awesome, you don’t want to miss. Stay tuned to CDL for all the awesome live updates and spoilers.