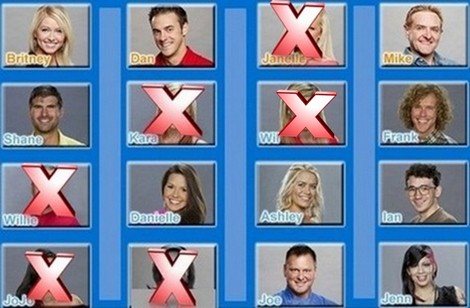 Tonight is another new episode of Big Brother 14 on CBS. Tonight we will get to see who the next house guest is to be evicted – remember last week Will was evicted.  Tonight is going to be an action packed night, because we have a double eviction.  We will also have another HoH competition.  If you missed the last episode (PoV competition), you can read our full and detailed recap here for you.

On last night’s PoV show Frank won the Power of Veto and of course took himself off the block.  Shane had to replace Frank and told everyone that he was choosing the person because it is the best thing for his game, he chose Jenn.  Through the game it had been Jenn’s strategy to lay low and now we are going to see if that pays off.

On tonight’s show it is a double elimination show – so that means it is going to be a really quick paced show.  Both Boogie and Jenn are up for eviction first and we are predicting that Boogie will be sent packing, but you never know! We are hoping that Boogie stays around with him gone there won’t be much fun or drama.  Can Boogie save himself?  Hit the comments and let us know what you think!  If Boogie is eliminated can Ashley and Frank survive because they were in an alliance with Boogie?

Once the first elimination is done tonight, the HoH competition start immediately and whomever wins will immediately have to put two people up on the block.  Following that we will have the PoV ceremony and the two houseguests on the block will try to win PoV.  Once that is over another houseguest will be eliminated.  Then on to another HoH competition.

Tonight’s episode: Tonight is a special double eviction episode along with Jenn or Boogie, another house guest will be going home.

Ian goes in to see Frank and Boogie and put his foot in the mouth that it is a tough decision for him to choose between Jenn and Boogie.

Boogie calls Shane, Dan’s bitch, and tells him he can’t wait until they come after him. Meanwhile, Dan is keeping silent, he is trying to ignore Boogie. Dan is hoping Ian realizes how much heat he is taking for him.

Jenn approaches Shane, she wants to know what is going one, why did she get put up on the block but he’s got nothing intelligent to say. Jenn keeps going all around the house breathing fire, will she turn the votes with he bad attitude.

When Boogie listens to the videos messages that the house guests taped for him in case he got evicted, Ian confessed everything, said he learned from the best, Boogie took it like a real pro and took his hat off to Ian.

The power is back up for grabs, this competition is called before or after: house guests have to figure out when certain events happened.  It is up to Britney, Danielle and Ian, the rest of the house guests are already out. Britney is out, will it be Danielle or Ian to win HOH? Ian is the new HOH, nominations are coming up in the next few minutes.

Time for Ian to put up his nominations, he puts up Frank and Ashley for eviction.

Time for the Veto competition and it’s called, “somewhere over the Veto” where the house guests have to collect clovers, but just one at a time. Frank has won the POV – well isn’t that a slap in the face for the “quack pack”.

Time for the Veto meeting, Frank decides to use the POV on himself. Ian, as HOH, has to name a replacement nominee, he chooses to put Joe on the block.