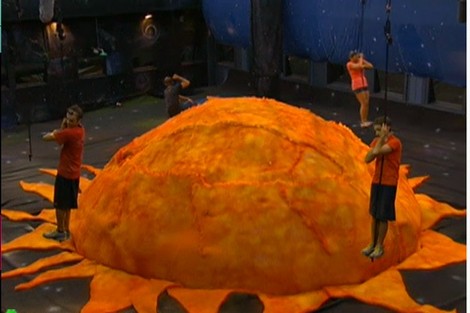 Tonight is another new episode of Big Brother 14 on CBS. Tonight we will get to see the conclusion of last week’s HoH competition which was called “Hold On To Your Sun” and we will find out who is put up for eviction.   If you missed the last episode (Live Eviction), you can read our full and detailed recap here for you.

On tonight’s show we will see the end of the HoH competition called “Hold On To Your Sun,” which they started last week.  In the HoH competition the first house guest to fall will find a punishment in a box, although the house guests thought it could be a reward or a punishment. Everyone was hanging from ropes with their feet on a disc, it was an endurance competition and starts with spraying the with yellow paint while they go round and round.

WARNING: Spoiler Alert, if you are one of those people who does not like spoilers don’t read ahead!  Joe fell off first and his punishment was  each time he hears music he has to Hula Hoop.  Next is Jenn and she really fell off hard.  Danielle is next and then Dan.  The last two standing or swinging :-) are Ian and Shane.  The two cook up a deal that will see Ian winning HoH and promising Shane not to nominate Shane and Danielle for eviction this week.  It is easy to guess at least one person Ian will put on the block, Frank.  To find out how it all plays out come back and visit us tonight!

Big Brother airs tonight at 8:00pm with the live eviction, we will be live blogging the show with all the up-to-the-minute details so make sure to come back to Celeb Dirty Laundry and watch the show with us. Can’t wait to see if there will be any more drama in the house, how about you?

Tonight’s episode: There are only seven houseguests remaining, tonight we find out how the  HOH competition played out from the last episode.

Joe is the first person to drop from the endurance competition and gets the prize in the box which is a punishment or reward. Unfortunately, America chose to give him 24 hours of hoola hoop boot camp.

Jenn is the next one down with Dan following close behind her. It’s down to Ian and Shane, they have reached the one hour mark. Shane is having a hard time holding on and Ian decide’s to give everyone a solar system trivia lesson. Shane asks everyone to leave the yard so he can make a deal with Ian, he wants Danielle and himself safe and in return he will give Ian the HOH. Ian is definitely in the top six and out to avenge Britney’s being voted out.

Shane tells Danielle that she is safe, he tells her about the deal he made with Ian. Frank would be happy if Ian targeted Dan, but it’s kind of tough at this point for him to through Dan under the buss. Danielle and Jenn start talking about Shane and she tells her that he hasn’t kissed her since the pirate competition. Jenn tells Danielle that Shane has referred to her as his girlfriend already. Time for Ian to show off his HOH room, Frank tells him that his mom is hot and then yawns through the rest.  The houseguests really have no interest in Ian’s room, but because he’s the HOH, they are all doing their very best to look like they care.

Ian is thrilled that the Quack Pack is back, he calls a meeting with Shane, Danielle and Dan to discuss his plans, he’s going for Frank and Jenn. Frank is trying to buddy up with Ian, he really wants him to understand that getting rid of Britney was just part of playing the game.

Ian is listening to Frank, he is tempted to save him and he could always put Joe up instead. Frank has finally removed his carrot costume and feels the house may just take him more seriously now.

Ian arrives in is HOH room and finds another Pandora’s Box, opening it can release something good or something bad. Ian decides to open Pandora’s Box and arrives in a room with a Christmas tree that has tons of presents underneath it. Then, former Big Brother player, Jesse, arrives in a Santa suit and a Speedo with gifts for the rest of the house guests.  The gifts are all crappy organic food, according to the house guests and Jesse heads into their food cupboard to remove all their junk food. Basically if it tastes good, Mr. Pecktacular is taking it.

Meanwhile, Ian is opening up some amazing gifts and enjoying himself despite the fact that he knows the other house guests are probably suffering.

Dan goes up to see Ian and wants to make sure that he is on board to get rid of Frank this week.  Ian thinks Frank is good to have around because he makes people mad; Ian is leaning towards Jen and Joe but that’s not the move that Dan wants him to make.

As a huge fan of the show, Ian is thrilled to be putting keys into the nomination box. It’s time for the ceremony, the first key goes to Shane, then Danielle, Joe and Dan. The two people nominated for eviction is Frank and Jenn.

Who will win the POV and will it be used to take Frank or Jenn off the chopping block? Stay tuned on Wednesday night when we live blog all the details of a whole new episode.