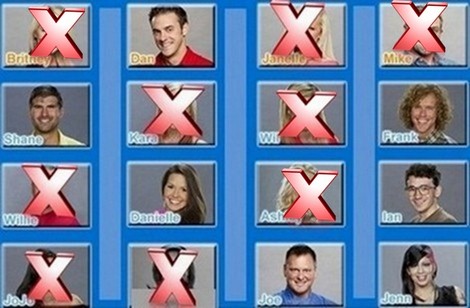 Tonight is another new episode of Big Brother 14 on CBS. It will be another double elimination tonight.  These double elimination nights are crazy because they move so fast.  Tonight’s show will open with us finding out who goes home Frank or Joe.  Frank believes without a doubt that Dan is going to save him and convince everyone to vote out Joe, after all, Dan did swear on his wife and marriage.  But we expect a big double-cross coming.  If you missed last night’s PoV episode you can read our full and detailed recap here!

On last week’s episode Dan won PoV and he uses it to save Jenn and take her off the block. He said he did it because Jenn saved him the previous week, so he wanted to pay her back.  Ian named his replacement nominee which was Joe.

On tonight’s show it is a double elimination show – so that means it is going to be a really quick paced show and intense. Both Frank and Joe are up for eviction.  We are predicting Frank goes home, even though Dan made a solemn and sacred swear, he said last night that he fully intends to stab Frank in the back.  Is there nothing sacred anymore?  Dan is really starting to get on my nerves.

Tonight’s episode: Dan made a final two deal with Frank and swore on his wife and his marriage that he would keep his word. Since then, Dan has reunited with the Quack Pack and plans on turning on Frank tonight and stabbing him right in the back with the ultimate betrayal.

It’s a double eviction tonight on Big Brother, two house guests are going home and if Dan has his way, one of them will be Frank.

Frank is starting to get a little suspicious of Dan who has assured him that they are still golden. Meanwhile, Ian tells Joe to be quiet and he is golden this week.

Dan is constantly thinking about game play, he goes to speak to Joe and tries to secure his place in the house if he were to win HOH.

Joe is such a goofball, it’s pitch black in the bedroom and he thinks Shane came in the room, but it was Dan and he says, “Dan just came in here and started whispering “. Dan is now wondering if Joe should be sent home because he obviously cannot be trusted.

Frank is shell shocked, Dan put his hand on the bible and swore his allegiance to him. Frank feels like he played a pretty honest game and finds it tough that hardly anyone returned the favour. In Dan’s video message, he tells Frank that there are no hard feelings. Julie asks Frank if there are hard feelings for him against Dan he says absolutely.

It’s time for a new HOH competition, the winner will have one in five chance to the grand prize. This competion is called “Make Your Case”. Julie will call out statements made by evicted house guests when they were on the chopping block, the house guests need to figure out who said what.

It’s a three way tie between, Jenn, Dan and Danielle. The next answer will be a number, the person closest to the number will be the winner of the HOH. Dan is the new HOH, nominations will take place in just a few minutes.

The live Veto competition has the house guests guiding shark finds through a maze, the first person to reach top of the maze will win POV, Ian wins the POV and has just a few minutes to decide if he is going to use it.

It’s time for the live Veto meeting, Ian uses the Veto on himself. As HOH, Dan has name a replacement nominee, he chooses Danielle.

That’s it for tonight, do you think Frank and Joe deserved to go home?