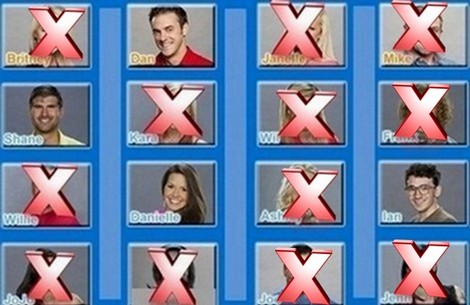 Tonight is another new episode of Big Brother 14 on CBS and another house guest is going to be sent home. Last night Jenn Arroyo was evicted, did you see the episode? If you missed the last episode you can read our full and detailed recap here.

On last night’s show, it was kind of predictable that if there was a chance for Jenn to go home that she would be the one leaving because she was the only house guest that was not in the Quack Pack alliance. Although, that didn’t stop Dan Gheesling from wanting Shane Meaney to go home, but as luck would have it Shane won the PoV and there went Dan’s plan of backdooring him.

Tonight will kick off the three part final HoH competition. The winners of each of the first two rounds will face off in the third round. The winner of the third round will select who they want to take to the Final 2. Round 1 and 2 are going to be physical, while round 3 will be questions and answers.

Last night Danielle Murphee won HoH and if you don’t want to be spoiled, don’t read any further to see who she puts up for eviction and who wins the coveted PoV.

Danielle nominates Dan and Ian Terry for eviction. Then Danielle goes and wins the PoV. Now the question that comes up is whether Danielle uses the PoV on Ian, Dan or not at all.  If the talk in the house drives this game, then Danielle is going to pull a shocker, use the PoV on Dan, put up Shane as a replacement and leave Dan with the sole vote. Will Dan vote out Ian and Shane? Most probably Shane because, if you remember last night when Danielle said that she was ready to “play the player”? Shane better watch his back tonight, ‘cause there’s no furry like a woman played and I have a feeling Danielle is getting Dan to do her dirty work.

Big Brother airs tonight at 9:00pm with the PoV competition and a live eviction, we will be live blogging the show with all the up-to-the-minute details so make sure to come back to Celeb Dirty Laundry and watch the show with us. Can’t wait to see how all the drama plays out, how about you?

Tonight’s recap: Tonight’s show opens with day 69 inside the Big Brother house and Danielle has already booked her place in the finale.  Soon Danielle will make her nominees.  Danielle has to choose between her best friend and her boyfriend tonight.

The Quack Pack walks around celebrating and quacking.  Ian figures it is going to be Danielle and Shane against Ian and Dan, exactly what he did not want to see.  Ian is not pleased that Danielle won HoH but realizes it all comes down to the final PoV.

Dan is not upset because he has final three deals with everyone in the else and none of them know it.  Dan tells Danielle to put him and Ian up.  He also tells Danielle what her speech should be.  Dan thinks he is totally controlling Danielle and maybe he is.

It is time for the nomination ceremony.  Danielle pulls Shane’s key and she nominates Dan and Ian for eviction.  Danielle saved Shane so he would trust her more, but secretly she is allied with Dan.

At the jury house – Ashley has been meditating and feeling very relaxed.  Ashley is excited because today a new house guest is coming and she is hoping it is Dan because she wants Frank to win.  The door opens and it is Britney.  Ashley gets emotional.  Ashley tells Britney Dan has to go.  Britney agrees Dan is going to win the game.  Frank walks in the door and the girls realize he has been evicted too.  Ashley got butterflies because she likes Frank.  Frank tells the girls what happened and how he got evicted.  Everyone regrets not getting Dan out sooner.  Britney and Frank start bickering and Britney tells them to face it they all got played by Dan.  Next to come to the jury house is Joe.

Britney and Frank continue to bicker.   Britney insists it is a game and people can use all the strategy they want.  Frank thinks peoples moral have to come into play.

It is time for the most important PoV competition of the season.   Each of the house guest have a molecule clue on a puzzle – they have to match the clues to the house guest.  The first house guest to complete their puzzle will win.  Danielle wins the PoV and jumps and hugs Shane, she is so excited she holds all the power in the house.

Dan is so excited because now he is certain he is going to the final three and he hopes he can convince her to take him off the block.

Dan comes into Danielle’s HoH room and Danielle asks Dan what he wants her to do.  Dan tells her to make her own decision.  Dan tells Danielle he does not trust Shane.  Dan feels Shane is the only person standing in his way.  Danielle asks Dan if she pulls him off will he save Shane.  Dan agrees but secretly says he will never save Shane.   Danielle tells Shane she may take Dan off the block and put him on.  She tells Shane, Dan will save him… oh, oh…….

It is time for Big Brother to vote.  America gets to decide which house guest they want to award $25,000.  The winner will be announced at the finale.

Ian and Dan make their pitch for Danielle to take them off the block.  Danielle tells everyone her decision is to save Dan.  OMG she is stupid!

Shane and Ian make their case to Dan to save them.

Dan evicts Shane and Danielle is shocked – she is an idiot!  Shane goes out to see Julie.

Dan pulls Danielle aside to talk to her.  Dan tells Shane she could not have beaten Danielle.  Dan pretends she did it for Danielle.  He tells her it is now easy for her to win the game.

Shane is upset because he trusted Dan 100% and Dan betrayed them.  Julie cannot understand why they trusted Dan given his track record.  Shane tells Julie Dan is just a dirty player.

Shane tells Julie there could be a romance with Danielle and he will forgive her for what happened.

Danielle, Ian and Shane are the final three and they are going to fight for their lives in the final HoH competition.

That is it for tonight!