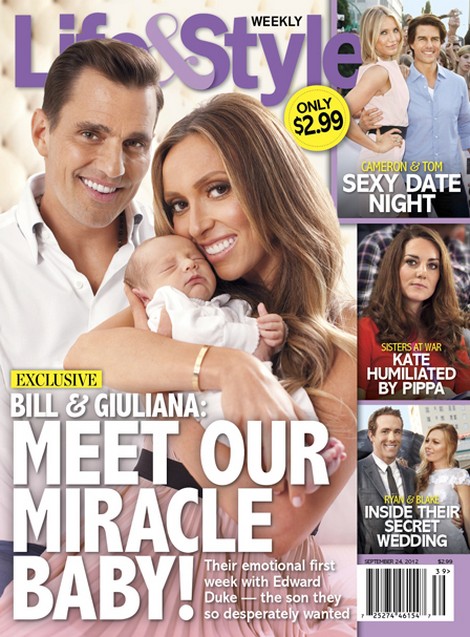 Parenthood has been a long time in coming for Bill and Giuliana Rancic. Their trouble conceiving was well documented on their reality show long before Giuliana was diagnosed with breast cancer. That diagnosis only made the idea of being a mother seem even more impossible to Giuliana.

She was told after undergoing a double mastectomy in December 2011 not to even attempt a pregnancy for five years so the couple began looking at other options. They found a surrogate and in a relatively short period of time, their son was on his way. The Rancic’s have decided to introduce Edward Duke to the world in the new issue of Life & Style Magazine, where they tell of how their son has changed their lives already in just a few short weeks,

“I had always heard that when you have a baby it completes your life — and it’s true,” Giuliana tells Life & Style. “I love my baby, and I love my new role.  Every day he’s changing — it’s just remarkable to see,” Bill, 41, tells Life & Style. “[He’s] got Giuliana’s dimples!” Explaining how they came up with the name, Giuliana shares, “Edward is Bill’s late dad’s name and my dad’s name. It was a way to honor them. And Duke means leader.”

Giuliana says that motherhood has come very naturally to her and that all of the pain and stress from the past few years just seems to have melted away now that she has a baby to care for. Her doting husband (of course) refers to her as “supermom” already. Make sure that you grab the latest issue of Life & Style to learn more about little Edward Duke Rancic!  In the meantime, are you happy to see this couple finally become parents? Do you think that they’ll use another surrogate in the future to add to the family or will Giuliana wait a few more years and then try for a baby of their own? Tell us your thoughts in the comments below!