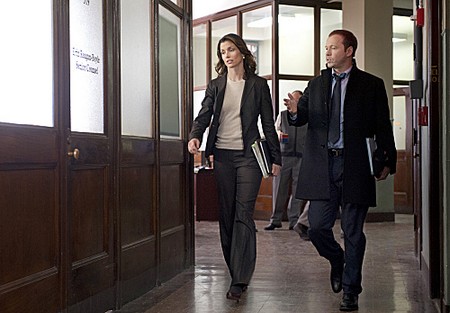 A whole new episode of Blue Bloods airs tonight on CBS and the episode is called ‘Some Kind of Hero.’   On last week’s episode Danny faces a moral dilemma over whether to arrest a suspect who may be linked to a robbery.

The difficulty arises when the man brings in a gun used in a theft. But Danny isn’t allowed to question the man due to the NYPD’s gun-buyback policy.  If you missed the episode you can read our official recap here!

On tonight’s show Danny causes waves in the department when he investigates a closed case, the suicide of a firefighter, at the insistence of the man’s 12-year-old son. Meanwhile, Jamie saves a baby from a burning building but worries it will jeopardize his undercover work when he is billed a hero in the press.

Blue Bloods ‘Some Kind of Hero airs tonight at 10:00pm ET and we will be live blogging all the details. So don’t forget to come back and refresh your screen often for live updates. While you wait for the show – check out the sneak peek video of tonight’s episode below and let us know what you think of the season so far!

RECAP: Danny is at school to pick up the kids and their friend Micheal’s father is there and he is a Firefighter. He and Danny joke back and forth about Firefighters sleeping all the time and cops loving donuts.

Jamie is grabbing lunch on a street corner when someone shouts fire, he runs to the scene and someone tells him there is a baby in the building. An explosion goes off in the building and Jamie goes in anyway and comes out with the baby.

At home, Danny is having dinner with the family and his wife sends the kids away because she just got an email from one of the mom’s at school, Chris the Firefighter just hanged himself.

Garrett is with Frank and tells him that his son Jamie rescued a baby in a fire and the press might find out.

Frank questions Jamie if anyone saw him leave the building when he rescued the baby. Garrett tells Frank that the press wants to write a story about the hero. Garrett leaves the room and Jamie is alone with his dad, he tells him he is sorry for risking his undercover status. Frank tells him there is no need to be sorry and that he is really proud of him.

The news is covering the story about the hero who saved the baby, but Frank won’t tell them that Jamie was that cop.

Frank calls in Jamie’s partner, he tells him that Jamie works undercover and it’s some serious business with some really bad people and he doesn’t want to blow his cover, or put his life in danger. He goes on to ask Sgt. Renzulli to take credit for saving the baby and he can’t tell anyone about this, not even his wife.

Danny gets a call, he heads to the morgue because he is looking for a double check on the autopsy for Chris, Michael’s dad but gets a refusal. Danny heads to the station and tries to reopen the case. His next step is to head to the fire hall and speak to Chris’s business partner, they owned a construction company together. His partner says he wasn’t that surprised that Chris killed himself because he was going through a divorce and there were financial problems, although there was a million dollar life insurance policy.

Danny meets with Frank and explains that he has a hard time saying no to the kid. Frank understands how Danny feels and wants to help any way he can.

Renzulli is upset with Jamie for never telling him that he was undercover, Jamie tries to talk to him but Renzulli wants nothing of it.

Danny is at Chris’s house and the detective who closed the case id surprised that he has his file in his hands. Danny tells him that there was another footprint on the chair other than Michael’s when he hanged himself and the detective tells him to give him a break, the guy was a classic suicide case. Frank calls Danny, he got another autopsy done and now there seems to have been a blunt force trauma to the victim’s head, the cause of death is not undetermined pending investigation. The Sargent is upset that Danny put his nose into the Firefighter’s case but ends up giving the case to Danny when he comes up with the new evidence.

Danny tells Erin that Jamie is still undercover, she is upset and heads over to face Frank about it. She is upset that Frank didn’t tell him about Jamie’s being undercover and saving the baby, he tells her that she didn’t know because she didn’t need to and this is his job.

It appears that Chris and his partner had a huge disagreement the day Chris died, his partner, Carney, threatened to kill him. Danny and Erin go to see him and question him further and Carney tells them they argued about a bribe for a building inspector named Reed.

Danny makes an appointment with Reed for an inspection and tries to bribe him. Reed turns him down, but Danny slips him some money and Reed takes it. Danny shows him his badge and tells him he is under arrest for bribery.

Danny tells Erin that he wants to get a search warrant to get into Reed’s house. Meanwhile, Renzulli is at a bar and Jamie walks in. Jamie tells him that he gave a nice speech, Renzulli tells him that all of sudden his wife thinks he is special. Jamie thanks him for what he did.

Danny happened upon a pair of Reed’s shoes, they match the print on the chair that Chris killed himself with.  Reed finally tells the truth, he had an argument with Chris and hit him in the head with a 2×4 and made it look like a suicide.

Danny goes to see Michael and tells him that he was right, his father didn’t commit suicide. Danny offers to take Michael to the game that his promised to take him to.

Family dinner, Henry tells the family that the meal is a heart attack waiting to happen with all the fried and fat food.  Erin makes toast to her brothers. Later Frank is alone with Jamie and asks him how is doing with all this, Jamie tells him that it is a hard thing to do, it is almost like taking a bullet for his partner. Frank tells him that there is no greater thing than saving a life, something he will never forget. Frank is off to bed and slips Jamie a badge for saving the child.