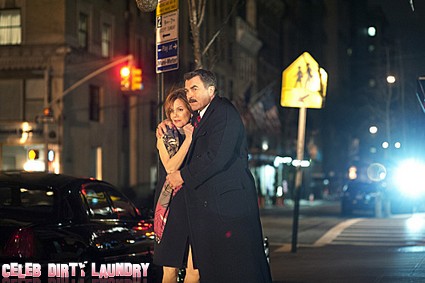 On tonight’s show Frank’s close friend, a high-profile reporter, is almost assaulted while in town investigating a story, Danny and Jackie attempt to track down her would-be attacker. Meanwhile, Jamie’s undercover case comes to a head.

The show airs tonight at 1opm on CBS and we will be live blogging all the details. So don’t forget to come back and refresh your screen often for live updates. While you wait for the show – check out the sneak peek video HERE of tonight’s episode and let us know what you think of the season so far!

RECAP: Frank is with Henry, he tells him that he is heading out to a dinner and will talk to him later. Frank arrives at the dinner event, he calls Henry – he wants out of this event until he meets an old friend, Melanie. Frank has left the dinner with Melanie, they are walking down the street and when he turns around to buy two newspapers he noticed someone suspicious and tells him to stop, the person has their face covered, they run up to Melanie and through acid at her. Frank quickly runs to her and pulls off her jacket that is burning.

Jimmy Reardon aka Jamie Reagan undercover, gets a phone call from Bianca, she tells him that Johnny Tessler is dead and he needs to meet with her. He’s worried, he had a beef with Johnny Tessler and is wondering if he is being set up.

Jamie heads to the apartment to meet with Bianca. She tells him that she and Johnny were getting their cars at the same time when he told her that he was being accused of stealing something at work. He starts telling her that uncle Phil is a liar and shouldn’t be throwing stones at glass houses. Bianca left, but when she returned Johnny was gone and she wants to know where he is. She thinks Jamie knows what happened. She knows her brother and uncle Phil, something happened.

Melanie is with Frank, she tells him that she is an investigative reporter and probably pisses off a lot of people, she doesn’t know who her attacker is. Danny walks in looking for more info, she gives him her producer’s name to contact to get info on all creeps that she’s written about.

Frank and Danny leave Melanie, at the elevator Frank tries to explain his relationship with Melanie and Danny seems creeped out by it, he doesn’t want to hear anything about it and calls Frank “Romeo”.

Meanwhile, Jamie wants to leave Bianca and she asks him to stay, she doesn’t want to be alone. He tries to take her gun, but she wants it back and before he leaves he tosses it on the bed, but he emptied the bullets.

Danny meets with Melanie and her producer, he tells him that it’s hard to take her stalker’s seriously and nobody has threatened disfigurement.

Jamie is upset, Bianca is missing and remains matching her description have been found behind a restaurant. Jamie meets up with Noble, he tells him that Uncle Phil is looking for Bianca and he and the family think Jimmy Reardon knows where she is.

Danny and Jackie are searching out Melanie’s attacker, they narrow it down to this one guy, Miles, and when they get there the man knows his rights, packs up his computer and walks away. Danny tells him that Melanie says hello, just to get his reaction, but it gets him nothing, the guy walks away. Danny hates when people know their rights.

Danny meets up with Erin and tells her that dad caught up with an old friend, Melanie.

Later, Danny and Jackie head out to Miles’s place, they have a search warrant. Miles has an alibi, he was working on a radio show.

Melanie heads to the station to see Frank, she tells him to call his men off because they are interfering with her business. She has a gun and doesn’t want the protection. Meanwhile, she gets a call – then ups and leaves before telling Frank to call it off.

Jamie wants out, he thinks it is his fault that Bianca is dead. Noble calls, he tells Jamie that his uncle Phil wants to meet him, now.

Danny thinks Miles was set up, but there is a long list of people Melanie fired and pissed off, so it’s going to be tough.

Nolan picks up Jamie, he is taking him to Phil’s club in Brooklyn. Nolan asks him if the cops are watching him because it appears that they are. Noble is getting nervous, when he drives up to the club Johnny is there, to “peel the onion”.

Danny is back at the internet cafe, he wants to know if anyone can hack the computers in his shop. Danny gets a call from Jackie, they picked a guy up and has the same container with him that the attacker had. Danny meets the guy and asks who hired him, the guy tells the truth, her producer is the one that hired him and he calls Frank to tell him, while he is on the phone with him, Frank is advised that they lost Melanie.

Nolan and Jamie get out of the car, when an argument ensues, the police show up. Jimmy Reardon is arrested on suspicion of murder.

Danny and Jackie go see Melanie and her producer is there, they arrest him and the truth comes out, he was the one who did it.

Jamie is happy that his undercover work is done, although he would have stayed there if he had to but he just didn’t like being responsible for someone’s death.

Frank has a parting gift for Melanie, it is a holster because if she is going to carry, she needs to do it properly and wear the holster on the inside of her thigh. Frank has to go to church and Sunday dinner. Melanie is going away for three days and asks him if he would like to go and he says someday, before landing a huge smooch on her. He tells her “keep telling it like it is babe”, then leaves.

At dinner, Frank is all happy and singing, he shows the boys how to make a proper Irish coffee.

That’s it for tonight, hope you enjoyed the episode as much as I did!