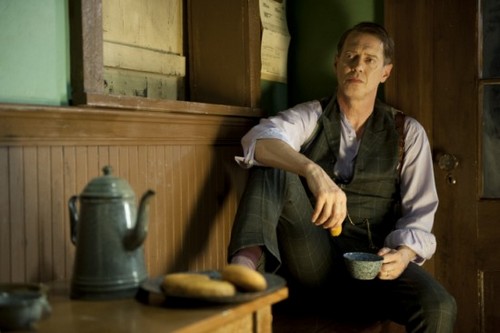 Only one more episode left of  my favorite show HBO’s BOARDWALK EMPIRE.  Can you believe season 3 is already coming to an end? On tonight’s show Gyp makes his move in Atlantic City, forcing Nucky and Eddie (Anthony Laciura) to seek refuge with Chalky. Did you see last week’s episode? We did and we recapped it here for you.

On last week’s show Nucky reached out to Gaston Means to keep Jess Smith quiet in Washington, and enlisted Owen to neutralize Gyp’s alliance with Joe Masseria in New York. Margaret considered an alternate future, at the hospital and at home; Van Alden’s side business backfired; Gyp fumed when a shipment came up short; Harrow coerced an apology for Julia; Chalky saw an opportunity in the ashes of a boardwalk institution.

Nucky is looking for help tonight and he offers someone anything they want.  I am hoping Richard and Chalky team up to help Nucky.  Meanwhile, Gyp is at Nucky’s house and has the dog he gave Margaret’s children.  He tells his men he wants Nucky in front of him, on his knees or on a slab. WOW!  Looks like a crazy episode!

Tonight’s episode is going to be another action packed one, which you won’t want to miss. So be sure to tune in for our live coverage of HBO’s Boardwalk Empire Season 3 Episode 11 — tonight at 9PM EST! While you wait for our recap, hit the comments and let us know what you think of Boardwalk Empire season 3, so far!

Tonight’s recap: Tonight’s show opens up with Nucky’s guards and Kessler removing Owen from the house.  Kessler assures Nucky that no one really noticed the package coming in.  Nucky asks if Margaret has left with the children.  Kessler tells him that they left by train.  Nucky asks Kessler if he knew that Owen was with his wife.  Nucky tells Kessler to leave it is not safe where they are.  Kessler picks up the phone to call Eli but the phone is dead.  All of a sudden a man comes in where the guards are and the guards shoot him.  The guards go into the room where Nucky and Kessler were and Nucky and Kessler were gone.

The dog is growling and Nucky and Kessler are in the the bedroom Nucky shoots several men, he ask Kessler if he is alright.  They both leave their house and Nucky sees a man and Nucky offers the man $500 to take his car.  Kessler tries to hurray him out.  Kessler is driving the car, Nucky tells him they cannot trust anyone.  Nucky realizes Kessler has been hit.

Gyp is at the house going over the bodies in the house.  Gyp thinks Nucky has been hit.  Gyp tells his men to put it on the street that he is paying to get Nucky.  Gyp sits at Nucky’s desk and he is going through his drawers, He takes a book that Nucky’s mother gave him when he was 12.  He looks at it and comments that he is not working from that dump.

Nucky takes Kessler to the hospital – he sees Dr. Landeau and tries to get him to help him take Kessler.  As he is talking to him the shooting starts again and Nucky has to pull away fast with Kessler still in the car.

In NYC Lucky is meeting with Mr. Maningrino and someone named  Sam  to see the heroin.  Lucky tells them it is $200.   Lucky is trying to sell the heroin to them.

Richard Harrow gets back to Gillian’s house and goes to his room.  Gillian is there and she asks Richard if he is in love.  She tells him she envies him, but he has to be careful.  She tells him he should not dream about things that can never come to pass.  That will only end up hurting him.  She leaves.

Nucky and an injured Kessler pull up to Chalky’s place and the door is locked he takes his gun out.  Dunn comes behind him with a rifle and tells him a man could get himself killed.

Nucky tells Chalky he came to him for help.  Owen is dead, Kessler has a bullet in him and Eli is not answering.  Chalky tells Nucky he is safe there for now.

Gillian comes into where her girls are and Gyp is there with his men.  Gyp tells Gillian he likes Atlantic City so much he is pitching his tent.  Gyp’s men start to drag something in and Gillian asks what it is.  Gyp tells her Nucky’s desk.

Gillian tells Gyp he is welcome but she has a business to run and Gyp tells her she can run her business but now she has a pal.  Gillian tells him she is happy about that.  Gillian goes to Richard Harrow and tells him that Tommy is not to come down and Richard is to lock him in the room.

Nucky calls to get Torrio but the person who answered with not let him speak to him.  Nucky tell the man on the phone his brother is there and he has to speak to him.  The man denies Eli is there.

Chalky tells Nucky that this is one big favor.  Chalky’s daughter’s boyfriend Samuel comes in and Chalky tells him he has to help Kessler but it is between them.  Nucky assures him he will make it worth his while.   Samuel is nervous he is only a medical student – Chalky tells him that family helps each other.

Samuel is trying to get the bullet out of Kessler and they hear a voice outside it is Gyp.

Chalky goes out and Gyp introduces himself.  Gyp tells Chalky that he is running things on the white side of town and he has come to pay his respects.

Meanwhile Samuel gets the bullet out as Nucky tries to keep Kessler quiet.

Gyp tells Chalky they both have a lot in common.  Chalky wonders what and Gyp tells him they have both been left out in the sun too long.  Gyp then tells Chalky he is going to treat him good, better than he has ever been treated before.  Then he shakes Chalky’s hand and then offers Chalky $25,000 to let him go in his house and drag Nucky out.  Chalky denies he has Nucky in his house.  Gyp says he is coming in the house to check, but Chalky is tells him he has a women in the house he does not want anyone to see.

Gyp then screams to everyone he is offering $25,000 for Nucky Thompson.  He tells Chalky he really wants to get along and leaves.

Nucky asks Samuel if Kessler will live – Samuel tells him that he is a student he does not know.

Chalky comes in and tells Nucky that he was offered $25,000 to give him up.  Nucky agrees to give Chalky $25,000, but Chalky wants to own Babettes on the Boardwalk.  Nucky tells Chalky he cannot give – what he does not own.

Gillian leaves the room and asks two of Gyp’s men to come in.  Gillian tells Gyp’s men that Mr. Rossetti wants Richard gone.  Gillian tells Richard she lied to him and that is what hurt the most.  Richard tells her Tommy does not belong there, she disagrees and Richard leaves.

Nucky is looking out the window where Chalky has him hidden.  Eddie Kessler is hallucinating, he thinks he has to make Nucky supper and get the car…. Nucky asks Kessler if he has a family and Kessler tells him a wife and two boys.  Nucky tries to calm him.

Chalky comes in – he wants to know if he is ready to go.  Chalky is going to take Eddie to an apartment block he has to take care of him.  Nucky wants to head out on the Horse Pike and he does not want him to stop till he tells him.

Lucky meets with Maningrino and Sam the men he is going to sell the heroin too.  The men give him the money and Lucky gives him the heroin.  He tells them it is a pound each and tells them they can weight it.  They tells him they trust him.  The man pushes him and then they take out cuffs.  They arrest him, they were police.

Nucky is in Chalky’s truck with a cover over him.  Nucky tells him to stay there, the truck stops and Nucky peeks out.  The truck is stopped and the men who stop them tell him they are looking for Nucky Thompson.  There is a $25,000 reward for him.  The men come to the back of the truck and Nucky shoots one and Chalky and Dunn shoot the other.  Chalky tells him he should leave town, Nucky tells him he is not leaving this is his town.

Richard is taking all his guns out and he has several.

Nucky sees cars pull up, he goes out and tells Willie to go back in.  Cars pull up Nucky clearly thinks it is Gyp. Chalky walks out – they stand side by side.

Out of the cars come Eli and Chalky’s men.  Eli tells Nucky he cut a deal.

Nucky asks with who Torrio?

The men part and out walks Al Capone smoking a cigar.  He says to Nucky, “we have been on the road for 18 hours, we rest and then we talk about who dies!”