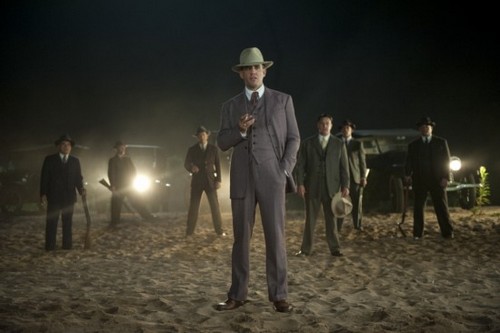 With only two more episodes left after tonight’s show HBO’s fantastic show BOARDWALK EMPIRE is racing towards it finale of season 3. On tonight’s show called “A Man, A Plan” Nucky reaches out to Gaston Means to keep Jess Smith quiet in Washington, and enlists Owen to neutralize Gyp’s alliance with Joe Masseria in New York.. Did you see last week’s episode? We did and we recapped it here for you.

On tonight’s show Nucky reaches out to Gaston Means to keep Jess Smith quiet in Washington, and enlists Owen to neutralize Gyp’s alliance with Joe Masseria in New York. Margaret considers alternate futures, at the hospital and at home; Van Alden’s side business backfires; Gyp fumes when a shipment comes up short; Harrow coerces an apology for Julia; Chalky sees opportunity in the ashes of a boardwalk institution.

Tonight’s episode is going to be another action packed one, which you won’t want to miss. So be sure to tune in for our live coverage of HBO’s Boardwalk Empire Season 3 Episode 10 — tonight at 9PM EST! While you wait for our recap, hit the comments and let us know what you think of Boardwalk Empire season 3, so far! Check out the sneak peek video of tonight’s episode below.

Meanwhile over at Tabor Heights Gyp is totally pissed because they lost 2 cases of whiskey because of large waves.  The captain’s cousin explains that the winds shifted and because the waves were large and the whiskey was not strapped down well they lost it.

In Chicago Van Alden comes in to sell some alcohol.  He asks the man to speak in the back – he assures him the alcohol was made by his wife a real Norwegian.  The man takes a drink and tells Van Alden it is good.  Van Alden wants $6 a bottle and he sells the man 4 bottles.  The man tells him to come back and he will buy more.

Gaston Means is calling for Nucky.  Nucky tells Kessler he is not to be disturbed.  Gaston tells Nucky that Jess is behaving erratically.  Gaston is worried Jess will say anything, to anyone and Nucky’s name would be on the list.  Nucky asks if it would be difficult to get rid of him.  Gaston tells him $40,000.  Nucky thinks he is expensive but tells him he will get paid when he sees the results.

Katie asks Owen why he is leaving early.  Katie thinks Margaret fancies Owen.  Owen tells her she is wrong, but Katie wants him to prove himself.  Owen tells Katie he will marry her if she wants.  Katie is shocked.

Owen comes to see Margaret – Owen looks upset and Margaret wants to know what is wrong.  She asks Kessler if Owen looks upset.  Owen admits it is Katie’s birthday tomorrow and he does not know what to choose.  Margaret tells him to come in so they can discuss the possibilities.  Owen warns Margaret not to toy with Kessler because he see more than she thinks.  Owen tells Margaret if they botch this Nucky will find out.  Owen tells Margaret she must leave first and he will follow 6 weeks later, so Nucky won’t be suspicious.   Margaret is going to run to St. Louis.

Eli, Nucky and Mickey Doyle are meeting and Owen is late.  They have found out that Joe Masserai go to the Turkish Spas one day a week.  Nucky is sending Eli to Johnny Torrio to get him and his men to support him.  Owen is going to take Joe Masserai out.  Mickey is being sent to take over Andrew Mellon’s operation.

Nucky wants to send more men with Owen to help him, but Owen wants to go on his own, more men, more problems he says.

Arnold Rothstein and Lucky are playing pool and Meyer Lansky is there.  Arnold tells Lucky they are on the verge of a war and he does not want to start on a new deal.  Lansky wants Rothstein involved in their heroin operation.  Rothstein tells Lansky and Lucky to be patient.  The deal will wait.

Gaston goes to see Jess and tells him the money he got from George Remus is marked.  Jess is upset, he tells Gaston he told Harry that.  Gaston tells Jess to take the money and burn it and send it to hell.  If he has not spent it yet there is not problem.

Gaston implies that Jess should be put down, he tells Harry for $4,000 he can take care of it.

Margaret is at the hospital she and the doctor that is giving classes for women are told that the Bishop has decided that the classes should be cancelled.  The doctor takes Margaret aside and gives her two diaphragms, one for her and one for Mrs. Shearer.  The doctor tells her the classes don’t have to stop, they could do them elsewhere.  Margaret is concerned he will get in trouble with the hospital and with his fiance.  The doctor tells Margaret that they work well together and he would like to continue.  She leaves.

Nucky is meeting with Mr. Mccoy, Nucky wants to know about Gyp Rossetti.  Nucky is sending Mr. McCoy to Tabor Heights to spy on Gyp and find out all the information he can on his operation.  Mr. McCoy agrees and will be going soon.

Van Alden comes back to the premises where he sold the liquor earlier in the day.  The man tells Van Alden he wants more liquor.  As Van Alden is talking to the man, two men come up and put a gun to his head and take him away.

Julia and Richard are sitting at her kitchen table.  Hr father comes in and sees them holding hands.  He is abusive again, calls Richard a circus clown,  and Richard gets up and attacks him.  Richard holds her father up and insists he apologize.  Julia is upset, Richard lets him go.

Lucky offers Joe info, he tells him Nucky Thompson is going after him.  Lansky tells him if they are partners they can give him information.  They agree to give Joe the info about how Nucky is coming after him.

Gyp is making a deal to get liquor, unbeknownst to him it is Nucky’s plant Mr. McCoy.

Jess apologizes to Harry.  Harry tells Jess he is thinking of retiring, he is not getting any younger.  Jess does not know what to say, he tells Harry, his heart was never really in it.  Harry tells him to get some sleep he will feel better in the morning.

Margaret is singing to Emily and Teddy to get them to sleep.  Teddy asks his Mom how much longer they have to stay.  Margaret tells him soon they will leave and have new adventures.  Nucky walks up behind her and tells Teddy as soon as they finish the repairs they are moving back home.

It is evening and Julia and Richard are sitting on the beach near the boardwalk, they have a campfire lit.  Richard tells Julia he wishes he could kiss her.  She gets close to him and gives him a kiss. ahhh

Jess is sleeping and Gaston goes in with a gun and gloves on.  He bends down over Jess’ bed and Jess is not there.  Jess walks out of the bathroom with a gun and catches Gaston.  Jess asks Gaston how much Harry is paying him to kill him.  Jess starts to cry and points his gun at Gaston.  Gaston offers to put his gun down and his hands up.  Jess asks Gaston if he has ever killed anyone and Gaston replies no.  Jess says, “I will show you how easy it is.”  Jess raises his gun and shoots himself in the head.  Jess is dead!

Gyp is happy every bottle was accounted for tonight, 1200 cases.  He tells his men his father was a brick layer and came home every night smelling like sweat.  Then we see the cousin Franco of the captain, Gyp has him  buried in the sand and the only thing showing is his head.  The tide is coming in and he will drown.  The captain begs Gyp to spare him.  Gyp takes a shovel and goes to hand it to the captain and then changes his mind goes to Franco’s head and beats him to death.  He tells the captain he owes him.

Kessler wakes Nucky up, there is a delivery.  It is a crate, Nucky is opening it and Margaret walks out.  The lid comes off the box and it is Owen and he is dead.  Nucky screams for Kessler to close the box.  Margaret sees Owen and she screams and starts to hit Nucky, she is hysterical, she runs out of the room.

Julia and Richard slept on the beach all night.

Nucky is banging on the door and trying to get Margaret to open it.  Margaret is thinking about Owen when they were talking about leaving earlier in the day before he left to kill Joe Masserai.  She remembers telling Owen she was pregnant, and the baby is his.  He tells Margaret he would like the baby to be a boy.