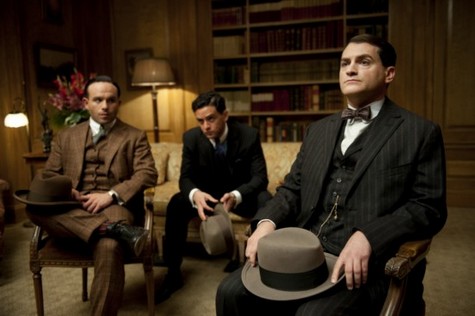 With only three more episodes left after tonight’s show BOARDWALK EMPIRE is racing towards it finale of season 3.  On tonight’s show called “The Milkmaid’s Lot” reeling from Gyp’s most recent attack, Nucky vows to eliminate his nemesis through a coalition of familiar partners.  Did you see last week’s episode?  We did  and we recapped it here for you.

On last week’s show Gillian made her peace with Jimmy’s death, though not with Nucky, as Gyp arrived to play ally. Working off his debt to O’Banion, Van Alden attended a meeting with Capone and Torrio; later, after a workplace meltdown, he considered Sigrid’s case for staying put versus resuming a life on the lam. With help from Gaston Means, Nucky pays an unscheduled visit to Andrew Mellon, offering the Treasury Secretary a recommendation and a business proposal. Margaret made a stand on birth control; Nucky and Owen shopped for a birthday pony; Billie eyed a future on the silver screen, to Nucky’s chagrin.

On tonight’s show Reeling from Gyp’s most recent attack, Nucky vows to eliminate his nemesis through a coalition of familiar partners. In Washington, the arrest of a high-profile bootlegger puts Daugherty (Christopher McDonald) and Jess Smith (Ed Jewett) on the hot seat. Emily (Lucy and Josie Gallina) gets a scaled-down birthday party; Gillian blames an absent Harrow (Jack Huston) for Tommy’s (Brady and Connor Noon) latest misadventure; Gyp decides to buy a town’s silence; Broadway mourns a fallen star.

Tonight’s episode is going to be another action packed one, which you won’t want to miss. So be sure to tune in for our live coverage of HBO’s Boardwalk Empire Season 3 Episode 9 — tonight at 9PM EST! While you wait for our recap, hit the comments and let us know what you think of Boardwalk Empire season 3, so far!  Check out the sneak peek video of tonight’s episode below.

Tonight’s recap:  The show opens tonight with workmen trying to clear the mess on the Boardwalk after the explosion.  Nucky is at the doctor and he cannot see straight and he is having ringing in his ears.  Nucky tells the doctor that every bone in his body is hurting.  The doctor tells him he needs bed rest.  Nucky tells Kessler he wants his brother.  Nucky gets up and he gets dizzy.  They tell him he is fortunate it was not worst.

Margaret’s kids are complaining because they cannot go out.  Margaret and the kids are forced to stay in a hotel with guards to protect them.  Margaret wants Teddy to make his bed, but he tells her the maid can do it.  Margaret is very frustrated she wants to see Owen.

Owen is meeting with several men and Margaret asks to speak to him.  She is not pleased with her new home and she asks Owen who did it.  Owen tells Margaret Mr. Rossetti.  She wants to know what Nucky did and he tells her Nucky said no and not yes.  Nucky comes in and Margaret wants to know what the doctor said.  He goes to get a drink –  Nucky is not hearing well.  Nucky asks Margaret and Owen what happened to the pony.  Margaret tells him they did not buy the pony because the hotel where they are living now won’t let ponies in.  Nucky is disappointed.

Sheriff Gerry Ramsay is telling a man if he sells alcohol he has to pay him.  He agrees to let the man get away with it once.  All of a sudden many cards pull up and men with guns get out.  It is Gyp Rossetti.  The Sheriff runs into the house and calls Nucky.  Gyp and his men come into the house and Gyp asks the Sheriff what is new – he asks the sheriff if he misses his company?  The Sheriff tells him he is ready to get back into business.  Gyp starts to beat the sheriff’s legs.

Poor Nucky is hearing ringing in his ears.  Chalky and several other men are there and Nucky is having many problems hearing, headaches and remember who people are.  He tells Chalky he can shine his shoes later.  He does not recognize Chalky.  The phone rings and Teddy picks up the phone.

Teddy comes in and tells Nuckya man is one the phone, the gypsy.  Nucky picks up the phone and it is Gyp and he wants to read something to Nucky.  He starts to read an article in the newspaper about Billie Kent dying.  Nucky hangs up.

Nucky tells Eli and Chalky not to tell the kids about it.  The phone rings again and Gyp tells Nucky he hung up the phone – Gyp gives Nucky his condolences from him and Joe Masserai.  Nucky wants to go to war against them and asks Owen to get all his friends together.

Gyp has a town meeting and agrees to pay the town money if they look the other way.  He tells them to write down their name and they will get money.

Over at Gillian’s house – Tommy Jr. is drawing.  Richard comes to see Gillian – he tells her there is a meeting at the American Legion and he wants the evening off.  Gillian tells him not to make a habit of it.  Tommy Jr. brings Richard his picture he drew.  Tommy goes back to play with Josephine – Gillian tells Josephine to leave because she has an appointment.

George Remus is running around his house in his housecoat as the feds come in and arrest him.  George tells him they are making a mistake, he has receipts.  Randolph asks him what receipts and he says from Harry Daugherty.  Randolph is interested in seeing them.

Emily’s birthday party is going on – but when Nucky comes he does not remember that it is Emily’s birthday or that he insisted on having the party.  Nucky asks Emily if she has ridden her pony.  Nucky forgets that they did not get the pony.  Everyone starts singing Emily Happy Birthday.  Nucky is a bit crazy and he starts talking crazy and then he starts to have hallucinations and he passes out.

Margaret comes out of the room and tells Owen, Nucky is resting and she has put a cold cloth on his head.  Margaret and Owen talk.  Margaret asks Owen when he will stop, he tells her a year or two.  She asks him why not now, he tells her to ask him now and he will leave.  Margaret tells him they will have to go far away.  He tells her what is another mile or two he is so far from home.  She hugs Owen, then leaves the room and tells the kids that Nucky is feeling better he just has to rest.

At the American Legion, Richard gets out of the car and he has Julia with him.  He gives her a corsage.  They go in and Mr. Gordon comes over to see them. He wants to know if Julia’s father is coming.  He tells them he will see them on the dance floor.

Tommy comes into the brothel where the girls are working and the other girls ask if he is looking for his pal.  The girls tell Tommy Josephine is waiting for him, he goes in the room and Josephine is having sex with a man, Teddy sees it and he runs away.

Nucky is lying on the bed and Nucky wakes up and Margaret asks if he can hear.  Nucky asks Margaret if she found her earring – he is confusing her with Billie.  Eli comes in and he wants to talk to Nucky, Margaret helps him get up and he starts to fall she helps him.

Nucky suggests they stay in his room, he asks Margaret to stay.  He tells her she belongs with him.  Eli and Owen come in and Owen tells him that it is all set for tonight except for Torrio.  Eli tells Nucky that in his condition it will probably not go well.  Nucky disagrees and tells them everyone will come and at the end of the meeting Joe Masserai will be dead and he is going to put Gyps guts around his neck.

Gyp is showing Joe Masserai his operation and how he brings liquor in,  He is showing him his operation.  Joe tells Gyp the explosion caused him problems.  He tells Gyp he will learn and grow and maybe one day he will be a good General and he pats Gyp on the face.

Richard and Julia are watching the other couples dance.  Julia asks him to dance, although she does not know how to dance, Richard teaches her.  Julia tells him he is a good dancer.  Julia pulls him to her and tells him she wants to give them something to think about and she kissed him.

Nucky is getting dressed with the help of Kessler.  Nucky runs to the bathroom and starts vomiting.  He sees Billie’s hummingbird earring on the floor she lost and he picks it up. He goes and sits down looking at it.

People start to show up at the Ritz Carleton and Owen and Mickey Dole welcome them.  Kessler gets Margaret and tells her Nucky is asking for her and all the men are there waiting for him.

Margaret tells him he needs to get up, finish getting dressed and attend to his business.

Richard walks in to his room and Gillian is waiting.  She blames Richard for not being there and Tommy running into the girls room and seeing Josephine with a man.  Gillian gave Tommy milk and rum to calm him, she leaves the room.  Tommy wakes up and Richard asks if he is okay, he tells Richard he wants to go home.

Nucky comes to the room, Owen is waiting Johnny Torrio is not coming.  Nucky asks Owen to open the door and not stand next to him.  Margaret whispers to Owen they will go as soon as they are able.  Nucky is in the room and he hears ringing in his ears but he pulls it together.

Nucky tells them they have to stick together and that there are going to be new opportunities, profit and peace.  He is willing to share with everyone.  Waxy tells Nucky he has no beef with Rossetti.  Nucky tells him not now but he can be the next person Gyp has a problem with – they need to stick together.  Nucky wants to set rules they can all prosper by.  Nucky tells them Joe Masserai is backing Gyp and he needs to fight him and he needs everyone’s help and in exchange he is willing to call them all his partners.

Arnold tells Nucky everyone wishes him all the luck in the world.  Nucky asks them if they won’t back him.  Meyer tells Nucky dealing with him is more trouble than worth.  Everyone gets up to leave.  Nucky tells Arnold he will not forget this.  Nucky keeps screaming Arnold but all the men have left.

Gyp walks up to his men loading liquor and he has a bicorne hat on – I guess he is trying to show the men he is a General like Masserai said he would be.