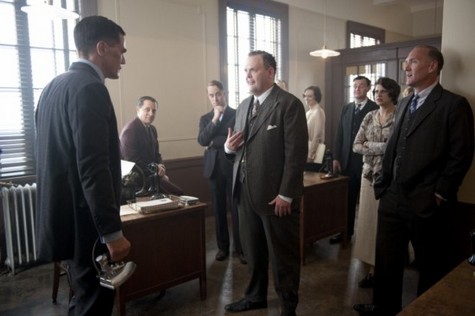 Boardwalk Empire is racing towards the season finale, we are already in the eighth episode. Tonight on HBO is an all new episode of BOARDWALK EMPIRE called “The Pony.”  On tonight’s show Gillian makes her peace with Jimmy’s death, though not with Nucky, as Gyp arrives to play ally. Working off his debt to O’Banion,Van Alden  attends a meeting with Al Capone and Torrio.   Did you see last week’s episode?  We did  and we recapped it here for you.

On last week’s show Richard and Tommy spent the day as guests of the Sagorskys, Gillian stayed at home and made a sacrifice to improve her future. In New York, after dinner and prayers, Gyp headed downtown in search of a blessing – from Joe Masseria.  Gyp was back and he is back with a vengeance, he has Lucky Luciano, Nucky Thompson and Arnold Rothstein in the cross hairs of his sight and he told Joe wanted them dead!  As a matter of fact he told Joe he is going to kill them all.  Gyp was not going to easily forgive the failed hit on his life and wanted Joe on his side.

On tonight’s show Gillian (Gretchen Mol) makes her peace with Jimmy’s death, though not with Nucky (Steve Buscemi), as Gyp (Bobby Cannavale) arrives to play ally. Working off his debt to O’Banion (Arron Shiver), Van Alden (Michael Shannon) attends a meeting with Capone (Stephen Graham) and Torrio (Greg Antonacci); later, after a workplace meltdown, he considers Sigrid’s (Christiane Seidel) case for staying put versus resuming a life on the lam. With help from Gaston Means (Stephen Root), Nucky pays an unscheduled visit to Andrew Mellon (James Cromwell), offering the Treasury Secretary a recommendation and a business proposal. Margaret (Kelly Macdonald) makes a stand on birth control; Nucky and Owen (Charlie Cox) shop for a birthday pony; Billie (Meg Chambers Steedle) eyes a future on the silver screen, to Nucky’s chagrin.

Tonight’s episode is going to be another action packed one, which you won’t want to miss. So be sure to tune in for our live coverage of HBO’s Boardwalk Empire Season 3 Episode 8 — tonight at 9PM EST! While you wait for our recap, hit the comments and let us know what you think of Boardwalk Empire season 3, so far!  Check out the sneak peek video of tonight’s episode below.

Tonight’s recap:  The show opens with Gillian having the corner declaring James/Jimmy dead, Richard is there.  Gillian is claiming that Jilly was a heroin user.  Gillian asks Richard if he has any last words and Richard tells Gillian that Richard deserved better than this.  They cremated Jimmy’s body.

O’Banion is demonstrating to Van Alden how is makes Whiskey.  Van Alden asks O’Banion what about the smell, O’Banion tells him no one will notice.  Van Alden (George) is working off his debt to O’Banion.  He wants 2 cases of whiskey a week from him.  He also tells Van Alden he will have to go somewhere with him the following day.

Nucky has bought Emily a pony and Owen is looking into it for him.  Nucky’s butler tells Nucky that James Darmody is dead from bathing.  He shows Nucky the paper.  Owen and Nucky are surprised.

Al Capone sees Johnny Torrio is back, he tells Johnny things have changed and they are having problems with Dean O’Banion.

Leander tells Gillian that a whorehouse is not the way to raise Jimmy’s son. Nucky comes to visit Gillian, he wants to speak to her alone.  He has come to offer his condolences.  Nucky tells her he is shocked.  Gillian tells Nucky James was troubled and used narcotics.  Nucky offers a toast to James and Gillian throws the drink in Nucky’s face.

Gillian accuses Nucky of killing James.  Nucky tells Gillian whatever she is trying to pull, she better remember she exists because of him in the town.

The sister is talking to Margaret and the doctor about the course they are giving.  Mrs. Shearer comes in, she wants to talk to Margaret, the doctor excuses himself.

Mrs. Shearer tells Margaret and tells her that her husband won’t stay off her, Mrs. Shearer wants to know how to prevent having children.  Mrs. Shearer admits that when Margaret saw her having a miscarriage it was not an accident.  Mrs. Shearer drank the bad milk on purpose so she could lose the baby.  She wants Margaret to get her a diaphragm so she can prevent getting pregnant.

Nucky is having tea with Esther Randolph.  Gaston walks in – he tells them Secretary Andrew Mellon is in Manhattan today and going to a private club.  Gaston has gotten Nucky passes to get into the club.  Secretary Mellon despises Harry Daugherty.  Gaston gives Nucky information about  Secretary Mellon i.e. he owns a still and Nucky is suppose to get him to agree to arrest George Remus.

Al Capone ask Jake if Johnny Torrio asked him anything about things., Jakes says No.

Dean O’Banion comes to see Johnny Torrio, he has Van Alden with him as his muscle.  Johnny Torrio threatens O’Banion and he is not happy.  Johnny starts to tell O’Banion about Pompeii.  The moral of his story is, you should not be more sorry about losing money, than losing your life.  O’Banion wants to talk about Joe Miller and Torrio tells him to talk to Al Capone and leaves.

Owen is brushing the pony that Nucky got for Emily and Margaret is there.  Owen approves of the pony.

Billie shows up for audition – and they ask her questions during her photo-shoot.   They are getting her to film a scene from the movie with the actor Gil Lonacker.  In the scene the actor kisses her and she does a great job with the screen test.

Mellon tells Nucky he has brought color to his day and then he has Nucky ejected.

Owen and Margaret leave the farm where they were looking at the pony and it is pouring raining.  They sit in the car and Margaret thinks a pony does not make sense for Emily.  Owen tells Margaret at least Emily will have fun.  Margaret wants Owen to teach her how to drive after they make love.

At the Iron Electric Company Ralph is giving a demonstration of how he sells irons.  They asks George/Van Alden to do the next pitch.   George is not pleased but he gets up to do it.   The other employees mock him and laugh.  The employee that he is doing the pitch with goes on and on mocking him.  Van Alden loses his temper puts the burning iron on the man’s face and then starts smashing everything in the office.  Van Alden has had enough!  He has a crazed look in his eyes and all the other employees cower away.  Finally Van Alden gets his hat and leaves.

Billie is drunk , dancing and celebrating with Vi and the actor Gil she was auditing with.   Someone knocks on the door and it is Nucky.  Vi lets him in and Nucky sees Gil Lonacker flirting with Billie.  Gil calls Nucky sir and Nucky tells him to leave, he refuses.  Nucky beats the crap out of him.  Billie gets him to leave with the girl.  Gil screams that the studio is going to sue Nucky.

Billie tells Nucky she likes being on her own alone and she does not find Nucky any fun this way.  Nucky asks what Billie wants from him.  Billie tells him she just wants him to be her gangster, he grabs her and they start making out.

Van Alden is watching his wife sleep and he starts to pack his bags.  She wakes up and he tells her they have to lose as soon as possible.  He wants to know where she wants to go, he is open to anywhere except New York, New Jersey or Illinois.  She gets up and gets him a glass of whiskey.  She tells Van Alden she made 14 bottles of whiskey, she made 3 extra so they could sell for themselves.  She does not want to leave she wants to make more alcohol so they can sell and stay and buy a house.

Gillian comes in and sees Lucky Luciano in bed.  She tells him he has to go.  Gillian wants to know why Lucky is meeting with her enemy Nucky.  She tells Lucky she wants him out of her business and gives him a check for $4,500.

Margaret was waiting for Dr. Mason – she tells him she needs his help with something that is rather delicate.  She asks Dr. Mason for 2 diaphragms.

Gillian is recounting the night she gave birth to James/Jimmy – Gyp is there.  Gillian asks Gyp if he has children.  He tells her two beautiful girls.  Gillian tells Gyp her grandson is all he has left.  Richard comes in and Gillian introduces him to Gyp.

Gillian asks Gyp if he has ever been at Babettes.  Gyp tells her he was there with Nucky once before they fell out.  Gillian tells Gyp that Nucky will be eating there with Mr. Rothstein.  Gyp is confused why Gillian  is telling him.

Nucky gets a call it is Andrew Mellon.  He tells him that a few days from now George Remus – will be arrested for violating the Volt-stein act and for paying off someone close to Harry Daugherty.  In return Mr. Mellon’s still has to be up and running in one month.

Nucky is with Billie and she has died her hair blond, she tells Nucky she wanted to be someone different for a while.  She pretends she is someone else, and Nucky goes along with it.  Nucky gives her a package, it is a guaranteed income, 1st of the month, for the rest of her life.  She gives him it back and tells him she does not need it.  He gives her it back and tells her to do what she wants with it.

Van Alden and his wife are in the Norwegian area selling their extra whiskey.  Van Alden comments it is easier to sell than steam irons.

Al Capone comes in to invite Johnny Torrio to dinner but he is going home for dinner.  Torrio tells Al it seems like he ha everything under control and send his love to his family.

Nucky, Lucky Luciano, George Rothstein and Billie Kent are walking on the Boardwalk talking when George Baxter an acquaintance of Nucky shows up. Nucky tells Billie to walk ahead, she does not have to listen to George, she walks ahead.  It seems George is in the radio corporation and a big blow hard.  He tells Nucky about RCA, as he drones on and on… Nucky stares at Billie and does not really hear George anymore.  All of a sudden there is an huge explosion in front of Nucky – Nucky is on the ground bleeding, many people are hurt.