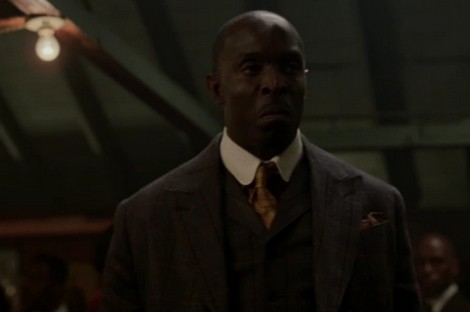 Tonight was the premiere of Boardwalk Empire season 2 and it was all that I hoped for.  We got to see a new more dangerous Nucky, he has decided he does not want to be half a gangster anymore.  We have a sneak peek video and some spoilers to wet your appetite for next week’s finale – episode 2 titled ‘Spaghetti & Coffee.’

On tonight’s show while hosting a New Year’s Eve party for 1922-23, Nucky makes a resolution that does not sit well with Gyp Rosetti, a touchy gangster with a thirst for bootleg whiskey.  He decides he is going to start selling his liquor exclusively to Arnold Rothstein.

Margaret looks to build on the Thompson endowment at St. Theresa’s Hospital, to her husband’s displeasure.  Margaret wants there to be better prenatal so less women miscarry. In Chicago, Al Capone is rankled by Irish mobster Dean O’Banion, Dean is not afraid of Al and as a matter fact threatens him.  Van Alden is not working for the Electric company selling irons and he stumbles onto a confrontation between Al Capone and Danny that could change his career path.  So much happened tonight you have to read our full and detailed recap here to find out tons more!

Spoiler alert: If you’re one of those people who doesn’t like spoilers, stop reading now! We have some juicy spoilers for you about the season 3 episode 2 of HBO’s “Boardwalk Empire.”

Official HBO synopsis of next week’s episode:  Mixing business with pleasure in New York, Nucky bristles at the collection tactics of Gaston Means, a “special investigator” with ties to Attorney General Harry Daugherty. At St. Theresa’s, Margaret is troubled when her altruism is met with resistance by both a patient and an idealistic doctor. Gyp extends his stopover in Tabor Heights, a town halfway between Atlantic City and New York, with an eye towards establishing a strategic foothold. Chalky and his daughter Maybelle fail to agree on her future with Samuel; Eli gets a new boss and faces new realities at home; a major liquor shipment takes an unexpected detour.

On next week’s show Eli tells Mickey Doyle that healthy is still alive.  Mickey Doyle says he brings people together.  Meanwhile, it looks like things are not going any better for Nucky and Margaret and she tells him he has a maddening way.  I wonder how long they will stay married.  Arnold Rothstein says protection is valuable.  I wonder if Arnold is going to need protection after Nucky gave him exclusive distribution rights to his liquor?  We also hear someone holding a knife saying, “Ordinary men avoid trouble, extraordinary men turn it to their advantage.” hmmm…

Boardwalk Empire Season 3, Episode 2 “Spaghetti & Coffee” airs on HBO on September 23rd, 2012.   Check out the preview video  of episode 2 and let us know in the comments below what you think!