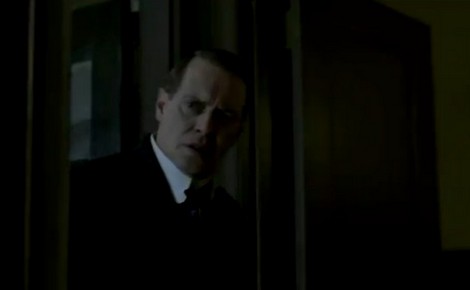 Tonight Boardwalk Empire aired with a new episode called “Spaghetti & Coffee.”  Tonight’s episode was great, we got to see more of Gyp Rosetti and saw just how much trouble he is going to be causing.  I don’t think Gyp is going anywhere soon and he is going to continue to be a thorn in Nucky’s side.  We have a sneak peek video and some spoilers to wet your appetite for next week’s episode 3 titled ‘Bone for Tuna.’

On tonight’s show Gyp stopped in Tabor Heights and found out it was 1/2 way between New Jersey and New York City.  A helpful gas clerk told him that Tabor Heights was the last gas station before New York.  Once Gyp heard this he started to hatch his plan.  Eli got out of jail and started working for Mickey Doyle at the alcohol warehouse.  Meanwhile we saw the return of Chalky White tonight.  His daughter Mabel’s beau wants to marry her, but Mabel is just not interested.

The problem is Chalky likes Samuel and think he would make a great match for his daughter and he told her she was going to marry him.  Mabel thinks Samuel is too serious and boring.  Mabel wants to have fun.  If you missed tonight’s episode you can read our full and detailed recap HERE!

Spoiler alert: If you’re one of those people who doesn’t like spoilers, stop reading now! We have some juicy spoilers for you about the season 3 episode 3 of HBO’s “Boardwalk Empire.”

Official HBO synopsis of next week’s episode: Disturbed by a recent nightmare and Billie’s absence, Nucky reluctantly joins Margaret to receive a high honor from the Church. Meanwhile, Gyp makes a deal with Nucky for a onetime liquor shipment, though the mobster’s longtime intentions remain very much up in the air. Van Alden regrets trying to socialize with his co-workers; Margaret takes her women’s-clinic pitch to a higher authority; Lucky and Meyer protect their investments; Richard sets the record straight with Mickey, and with Nucky.

On next week’s show the preview opens with Nucky and Margaret walking up the aisle of the church.  It looks like Margaret got her way and a reluctant Nucky is at the church to received the award from the Bishop.  The next scene is Nucky saying, “I learned a long time ago not to take things personally.”  I wonder if he is alluding to the fact that Gyp has stopped his convey from filling up with gas in Tabor Heights? 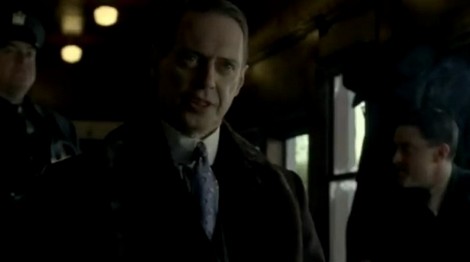 Gyp Rosetti asks, “Everyone is a person right?”  Gyp should remind himself of that.  Next we see Gyp asking someone, “So, how else could they take it?”  Gyp thinks that Nucky is a worried man.  Nucky tries to negotiate a deal for his liquor passage with Gyp.  From the preview it looks like Gyp is just as brutal as ever and there is a lot of gun fighting & fires going on and he tells a women it looks like they are staying around.  I bet the towns people of Tabor Heights are not thrilled by that! 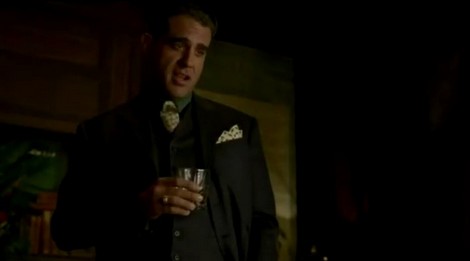 We did not get to see Van Alden this week but next week he is back in the mix.  Van Alden finds himself in Chicago and in the wrong place at the wrong time.  It also looks like Lucky Luciano is getting involved next week and Gillian is telling someone that Nucky’s brother tried to kill him.  Gillian is such a trouble maker.  Richard is popping up next week, remember last week he killed Manny.  I wonder who he will be gunning for next week?  Meyer Lanksy draws a gun on someone as he tries to protect his and Lucky’s investment.  It looks like all the mobsters are getting involved.  Check out the video below there is a lot more happening!

Boardwalk Empire Season 3, Episode 3 “Bone for Tuna” airs on HBO on September 30th, 2012.   Check out the preview video  of episode 3 and let us know in the comments below what you think!