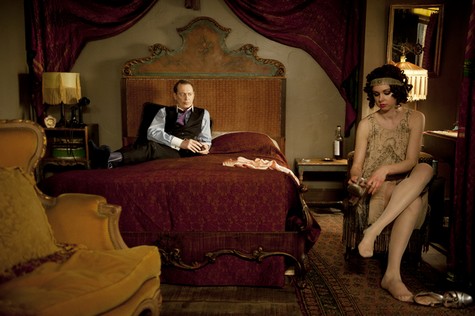 Last night was the fifth episode of Boardwalk Empire season 2 and it was crazy, violent and jammed pack with action.  Van Alden and new wife Sigrid killed a federal agent, Benjamin tried to kill Gyp Rossetti but failed.  You just know the consequences of that is going to make next week’s episode filled with a lot more drama.  Gyp is not going to take his attempted assassination sitting down.  We have a sneak peek video and some spoilers to wet your appetite for next week’s episode 6 titled “Ging Gang Goolie.”

On tonight’s show after ripping Nucky a new one about his liquor problems, Arnold sent Gyp an unequivocal message in Tabor Heights.  Unfortunately, the message failed and I do not think it is going to scare Gyp, it is just going to make him crazier.  In Washington, Gaston Means saw an opportunity in a Senate investigation of Harry Daugherty and the Justice Department.

Billie’s show was going to shut down and Chalky and Dunn give convince Eddie he will be Billie’s  new co-star to revive her faltering show; Van Alden and Sigrid receive an unexpected visitor and that is the last anyone is going to see of him; Gillian worried about keeping her business afloat in Jimmy’s absence and refused to have him declared dead.  Margaret had an awkward moment at Madam Jeunet’s when she bumped into Nucky and Billie.  Did you see last night’s episode?  We did and we recapped it here for you!

Spoiler alert: If you’re one of those people who doesn’t like spoilers, stop reading now! We have some juicy spoilers for you about the season 3 episode 6 of HBO’s “Boardwalk Empire.”

Official HBO synopsis of next week’s episode: After being detained in Washington by Daugherty’s henchmen, Nucky approaches his onetime nemesis, Esther Randolph, and later entertains an intriguing proposition from Gaston Means. In Atlantic City, Margaret copes with Teddy’s demons while Owen investigates a suspicious fire, and Gillian feuds with Lucky and finds a surrogate for Jimmy. Richard connects with a pugilistic vet named Paul Sagorsky and his daughter, Julia.

On next week’s show it looks like many threats are closing in.  Margaret Schroeder is at home with her children and her son Teddy tells her he was looking for the man, “He was here!”   It seems someone was at Margaret’s house, as we see Owen looking around, what happen to the guards Nucky was suppose to post?  Later Margaret is sitting down with Owen and she asks him if it was Gyp Rossetti.  Remember on last week’s show Arnold Rothstein sent a clear message to Gyp when they sent Benjamin to kill him.  Of course Gyp probably thinks that it was Nucky who arranged the hit, and Gyp is crazy at the best of times so……  It looks like everyone is looking for Gyp – Eli goes to the diner in Tabor Heights and tells them if they see one hair on his greasy head, they call him. 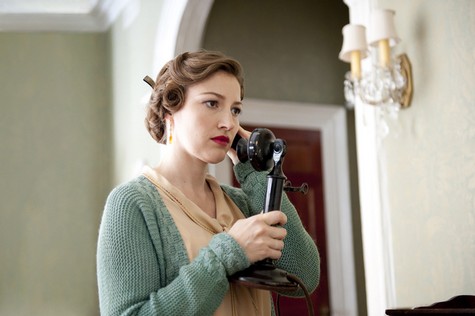 Lucky Luciano and Gillian are feuding, Gillian wants to update her brothel and Lucky is not interested.   Lucky is over at her house/brothel and since he is naked I assume he was partaking in some of the women.  He tells Gillian he is part owner of the brothel and she responds it is her house.

Nucky is having problems and asks someone on the phone how they got his number and we see another scene where Eli is getting beat up.  Margaret tells Teddy to go to his sister and she gets her shotgun out.  Margaret is ready to shoot anyone who wants to try to hurt her children.  Owen visits Margaret and tells her it is all taken care of.  Margaret asks, “What did you do?”   Later we see Margaret running outside in her nightgown so maybe it is not all taken care of. 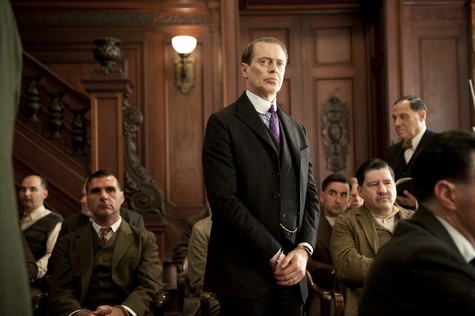 Nucky is in a bit of a mess in Washington, DC. thanks to Harry Daugherty.  Harry is potentially in a bit of hot water because of the Justice Department  committee where they are investigating corruption.  Secretary Mellion may or may not have implicated Harry as one of the culprits.   Perhaps Harry is using Nucky to take the focus of of himself.

Later Nucky meets with someone and tells him they have a common enemy.   We also hear Nucky tells someone, “If you bring me down, you are coming with me!”   Next week’s episode looks like it is going to be explosive.

Boardwalk Empire Season 3, Episode 6 “Ging Gang Goolie” airs on HBO on October 21st, 2012.   Check out the preview video  of episode 6 and let us know in the comments below what you think!