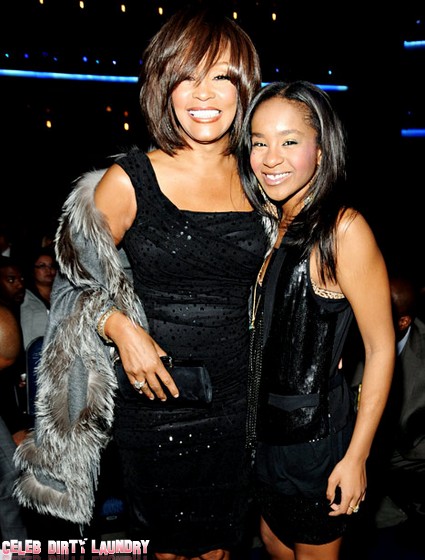 You know there’s a Whitney Houston biopic coming. Any star who dies before their time is a prime candidate for a movie. Add the diva’s rollercoaster personal and professional life into the mix and it practically writes itself! But who would play the superstar who reached the very top of her game and then sank to the depths of alcohol and drug addiction? There’s someone who’s very close to Whit who reckons she’s the perfect choice.

According to TMZ…Bobbi Kristina Brown is adamant she’s the only person who can play her Mom on the big screen and do her justice. The 19 year old has been telling friends no one knew her troubled Mother better than her very own daughter. She’s got a point. The teenager saw the superstar’s career implode first hand as a youngster. She knows more than anyone what went on behind closed doors.

The only trouble is Bobbi Kristina may have some competition from one of the biggest singers in the world today. Celeb Dirty Laundry covered Rihanna‘s quest to play Whitney in a biopic here Rihanna Keen To Portray Whitney Houston On The Big Screen RiRi is determined to prove herself despite little acting experience and nab what she regards as the role of a lifetime. There’s also Jennifer Hudson who many say is the perfect candidate to play Whitney. So it’s Bobbi Kristina versus Rihanna versus J-Hud.

There’s been no official word on a Whitney biopic yet but there should be an announcement soon with producers keen to get a film made while interest in the Grammy award winner is still sky high.