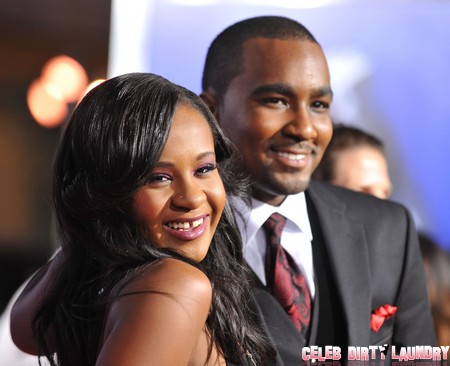 It sounds like Whitney Houston’s daughter, Bobbi Kristina Brown, doesn’t have such a perfect relationship after all.  The troubled young girl has been dating Nick Gordon (the two were raised as brother and sister in Whitney’s home) for quite awhile and on Sunday night the two were in the middle of a fight when Nick drove his 2012 black Camaro into something and the damage pretty much totaled the whole front end of his car in Alpharetta, GA.

After the accident, the car was missing the front right tire, the front bumper was torn off, and the airbags were deployed — but somehow it got back to Bobbi and Nick’s apartment.
Cops went to the apartment soon after the accident for a noise complaint, but no one answered the door. According to the incident report, officers saw the car parked outside the apartment with its hazard lights on — and it appeared it had been driven in a damaged state.

No word as to whether Bobbi Kristina or Nick were injured in the wreck but I’m guessing if they managed to drive away and then return home to continue their fight, neither can be too bad off. The accident is currently under investigation and I have to wonder why they drove away from the scene.  Maybe it was simply because they could get the car home themselves, or maybe it was something else.

Bobbi Kristina has been known to dabble in drugs and alcohol in the past and while I haven’t heard any rumblings lately, I have to wonder if they were in a bit of an “altered” state and that only helped to fuel their need to get out of there before the police arrived.  Do you think they were drunk or high at the time of the crack up? Tell us what you’re thinking in the comments below!