Both Kim Kardashian And Kanye West Make Asses Of Themselves 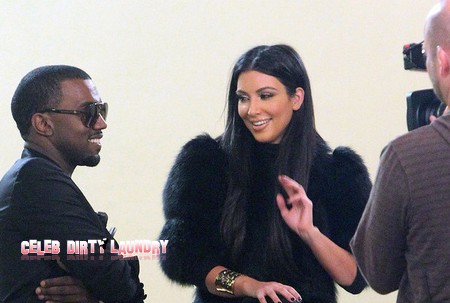 Here we go again Kittykats, who is making a scene at his own fashion show in Paris no one but Kanye West. (Lord help us all!) Remember now he has, supposedly, been studying the fashion business in Paris for a year now. I think he went after catching all that flak from that award show.  You know the one, when he appeared on the red carpet with an opened bottle of Hennessey, (we all should have known then no good was going to come from this award show without him acting a fool). Well remember guys he didn’t disappoint us he jumped on the stage and dissed Taylor Swift.  Oh! You remember now good.

Here comes the fashion show. One model was backstage crying because the shoes he had made were hurting her feet so much, I guess the pain was unbearable. True Kanye style he starts yelling at the poor crying girl. From the reports on his fashion show, it seems the shoes were a big problem for most of the models, it seems they were not crafted correctly.

They are professional models for Pete’s sake they’ve walked in all kind of shoes but these shoes were just not right. Now he is looking for people to pay $2,000 to $3,000 for shoes that don’t fit, (please get real). Kanye you are a perfect example why 1st time designers should just start off with one thing. If you’re going to do clothes, do clothes if you’re going to do shoes do that. Leave the clothes and shoes together for designers that have been in the fashion business, hmm…. I don’t know more than a minute you think.

Now who else was over there in Paris to lend him “support”, Kim Kardashian, and why not (God forbid she stay out of the spotlight for 2 seconds!). They say nothing’s going on, but I don’t believe either one of them, because if that’s true what’s with the, “touchy feely”, these 2 do.  We know for a fact that Kim’s sister Khloe wants her to get with Kanye.

I believe Amber Rose when she was questioned on that subject – she says Kim stole Kanye from her – and she said she saw some questionable email between the 2 of them. (You know it was rumored that when Amber & Kanye broke up he gave her 1 million dollars to keep her mouth shut about intimate details of their relationship).  (That was never confirmed officially, as if) She only responded to the questions when they press brought it to her, she didn’t go to the press and she did not talk about the relationship they had together. She could careless anyway, she is engaged and in love. Go Amber.

Look, fix your attitude Kanye we all love your music so would you please stop with the drama.  Calm down