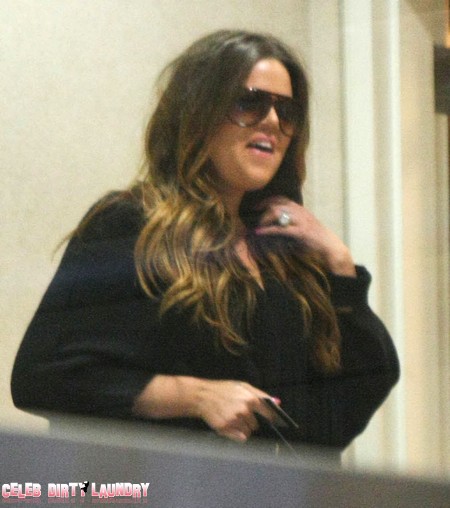 Kim Kardashian‘s sister Khloe Kardashian thinks she and Kanye West would make a great couple.  In fact Khloe is certain that the pair would find lasting love together.  Is Khloe on crack?

Kim is a total famewhore who wouldn’t know what love was unless if it bit her in the behind.  Kayne is another egotistical famewhore who now fancies himself as a fashion designer – OMG!  Between the couple there would be no space in the bedroom for both of their egos.

Khloe claims that the pair have never dated but nevertheless is convinced they are meant for each other.  Speaking on DJ Sway’s Shade 45 radio show last week, she said:   “They were talking and trying to go on a date here and there, but it just didn’t work out.  I know they hung out, but I know it’s never gotten to there … I genuinely think that because we have so much in common – like our families, losing parents and we do have a lot of connections – I think that if they were to go there, it would be a long relationship.”

Other people claim that Kim and Kanye have not only already dated but slept together. Kayne’s ex-girlfriend, Amber Rose, says that Kim is a cheating slut who destroyed her relationship with the rapper.  Although Kim has always insisted that she and Kanye were just friends, it appears that they were friends with benefits!

Whatever the truth is we have to assume that when Khloe is pimping out Kim to Kanye there will be more to this story soon.  Where there is smoke there is usually fire…