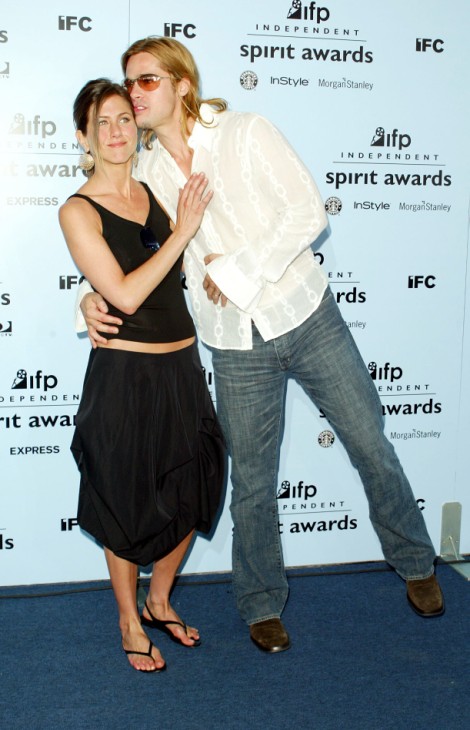 We knew Brad Pitt wouldn’t be able to help himself. He just had to butt on in there and ring up ex-wife, Jennifer Aniston, to congratulate her on her upcoming wedding to Justin Theroux. How… civil? Yes, Brad is nothing if not civil but I’m wondering if this little phone call came too quick. Should he have given her a little more time to bask in her engagement glow before he called her up and essentially reminded her of their busted up marriage? And was Angelina Jolie listening in while simultaneously clutching a chunk of Brad’s hair so he didn’t overstep his bounds? Unfortunately, The Mirror had nothing to say about that. It probably will tomorrow!

I’m told: “Brad gave Jen a quick call to say how pleased he was to hear that she was getting married.

“He jokingly asked if he should ‘save the date’, and they both laughed, but told her in all seriousness that he was really happy for her and Justin.

“He wished her luck and told her he hopes they’re very happy together.

“Brad and Angelina is due to marry in the next few weeks and she wished him all the best for his wedding, too,”….

My source continues: “Brad and Jen don’t get in touch that often as they’ve both moved on with their lives.

“Jen does still chat to his mum, Jane, so there are rumours in Hollywood that she will make an appearance at the wedding.”

Always the Brad Pitt’s mom reference! Oh, you sly Mirror! They kept Angelina out of this story but had to still basically infer that Brad’s mom will always prefer Jen to Angelina! Of course she would. Jen was probably the quintessential perfect daughter-in-law, always defering to her mother-in-law’s feelings. I’m not saying Angelina is selfish or even heartless, but I bet she isn’t as afraid to unleash her opinions and that’s always a recipe for unnecessary confrontation between family members. Whatever, bravo to The Mirror for slipping that future cover story in on us. Already thinking of a headline… “Brad Pitt’s Mom Is Maid Of Honor At Jennifer Aniston’s Wedding To Justin Theroux!” What? It could happen!

Anyway, so I actually believe this story. I wouldn’t put the well-wishing past Brad Pitt. Jennifer Aniston was the dumpee in that relationship so Brad can call and patronize whenever he likes. It doesn’t work the other way around. That just makes Jennifer look desperate and I’m sure she wouldn’t want Angelina finding her number on Brad’s phone!

Do you think it was inappropiate for Brad to call Jen so soon after her big announcement? Do you think it was his place to say anything since they barely even talk anyway? Also, what do you make of Jen and Brad Pitt’s mom’s relationship? Is that weird to anyone else? I get they liked each other but sometimes you just need to cut the cord and move on.