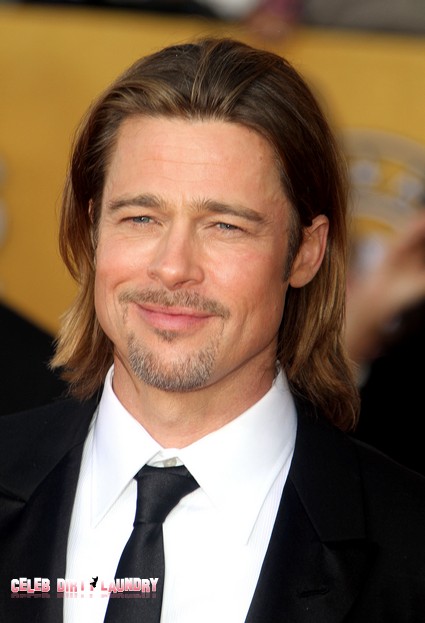 Angelina Jolie was flirting openly with gay icon Tilda Swinton as she apparently got drunk at this year’s Screen Actors Guild Awards. Brad Pitt was shaken and upset – concerned that Angelina could be craving her old days of drug use and affairs – like the one she had with actress-model Jenny Shimizu 15 years ago. Although often thought of as Hollywood’s most glamorous couple, Brad must have his worries these days since this behaviour on Angelina’s part comes along with stories that she slept with Johnny Depp while the two were filming The Tourist.

In Touch reports that a family friend says:  “She was downing glass after glass of red wine.  Brad even caught her sneaking sips from a bottle of Grey Goose vodka hid under the dinner table.”

This must have freed up Angelina’s already free spirit and led to the overt attention she paid to Tilda. Brad was less than thrilled with the combination booze and flirt fest.

According to Globe Print Edition – Feb 20, 2012 eyewitnesses and sources:  “They had a huge fight when they got home.  Angelina told him he was just being jealous and that she can whatever she wants.  Angie was all over Tilda like a gushing fan.  They were practically nose to nose for most of the evening, whispering and giggling tot he exclusion of everyone else.”

“Angie was very touchy-feely. At one point, she took a huge swig of her red wine, licking her lips sexily, and hung on every word Tilda said.  Angie seemed to be turning on the full wattage of her charm and Tilda was clearly lapping it up.”

A close friend of Brad’s says he is furious – “he knows Angelina always had an eye for the ladies and though Tilda’s straight she’s a massive gay icon.Angelina’s always been spellbound by Tilda and her kinky lifestyle – she’s told Brad she has a school-girl crush on her.”

What do you think – is Angelina trying to bust out and get back to her wild days? Or are the tabloids just trying to sell magazines? The truth is probably a bit of both.