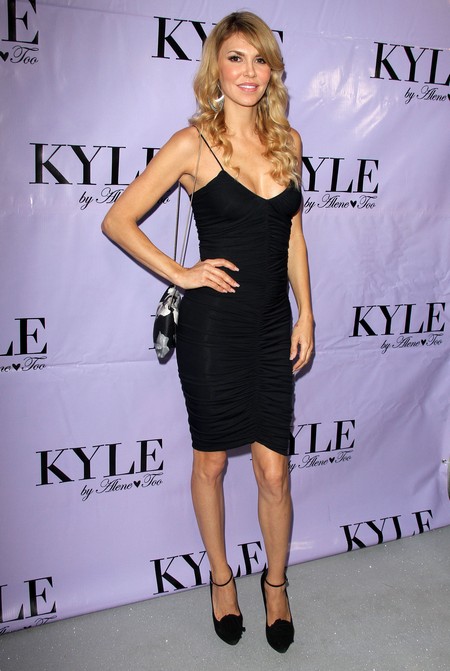 Oh boy, it looks like Real Housewives of Beverly Hill’s star Kyle Richard’s is probably not Brandi Glanville‘s biggest fan right now. The ladies have been filming their upcoming season and a few weeks back Kyle hosted her annual white party. The event is supposed to be an elegant, upscale event but without fail something always happens to make Kyle want to scream. This year Brandi Glanville took the whole elegant bash down several notches by hooking up with someone- in Kyle’s bathroom!

Radar Online has more details,  “Brandi was in the bathroom with a guy having sex when the girls caught her,” multiple sources — who all say they heard explicit noises coming through the bathroom door. “They couldn’t believe that she was doing that and they were all stunned when they found her. The crew thought it was hilarious and would really make for great TV, but who knows if they’ll ever air that,” Radar was told. “Poor Kyle planned this gorgeous party and her guests were acting like total hicks the entire night.”

Here’s the thing, if you’ve watched Brandi on Real Housewives Of Beverly Hills then you know she’ll apologize for embarrassing Kyle and other guests, but she won’t be sorry. Brandi is just THAT kind of girl. She may live in Beverly Hills but that doesn’t mean for one minute that the classiness around her has rubbed off.

The girls are filming their reunion show this week and I’m betting there will be fireworks galore between Kyle and Brandi.

Do you think Brandi Glanville caught having sex in the bathroom at Kyle Richard’s party went too far? Do you think it was an extra bid for attention or do you believe that Brandi simply doesn’t care what people think of her and so she refuses to put on appearances? Tell us your thoughts in the comments below!