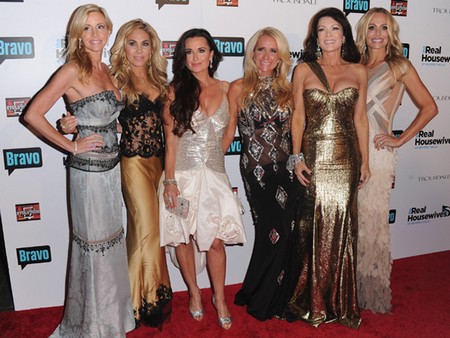 You know that Brandi Glanville had to begin her second season on The Real Housewives of Beverly Hills with more than a little bit of drama, right?  Well, new to the cast is Yolanda Hadid and upon being introduced to her (by Lisa Vanderpump) Brandi kinds of acts the part of uber mean girl saying, “You know everyone, you sleep with everyone… it’s all good.”  Yolanda is absolutely stunned by Brandi’s comment- or at least pretends to be- and then the trio attempt to continue a fairly normal conversation.

Yolanda is wondering how on earth, the always classy Lisa could even be friends with a chick like Brandi and so as Lisa starts to gently explain their connection, Brandi interrupts with a bombshell. She steamrolls whatever Lisa was attempting to say with a super giddy, “We made out!”  That’s so NOT the way that Lisa wanted Yolanda to connect her with Brandi!

Lisa explains that it’s behavior like this and inappropriateness that causes Brandi to clash with the other women. While I agree Brandi could have a little bit more of a filter, I kind of like the fact that she just tells it like it is. The other ladies have made fun of her for her redneck upbringing and you can dress her up, but she’s still a country girl at heart and that girl says what she thinks. Brandi gets accused of many things but being fake is never, ever one of them. Last season she called Kim Richards on her drug or alcohol problem the first time she met her. The rest of the ladies flipped because they try to keep these things under wraps, but Brandi brings a level of honesty to the show.

As for making out with Lisa, was it just a kiss?  Tell us your thoughts in the comments below!