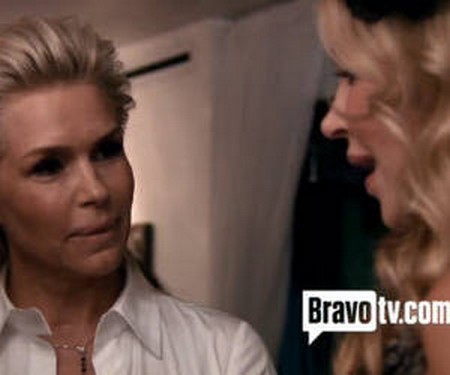 Despite always seeming to put her foot in her mouth at the most inopportune times, I always thought of Brandi Glanville as the ditzy, hippie chick who loved to wear dental floss bikinis and talk about inappropriate things like sex toys and blow jobs. However, it seems her cougar claws are coming out on this new season of Bravo’s the Real Housewives of Beverly Hills.

Newcomer Yolanda Foster, who is married to mega-producer and songwriter David Foster, certainly had a rude awakening when introduced to Glanville.

“Your ex-husband is Mohammed.” Glanville states nonchalantly, in which Foster replies equally as nonchalantly:

“You know everyone, you’ve slept with everyone, it’s all good.”

OUCH!!! Where the heck did that come from? I can’t wait for the new episodes of the Real Housewives of Beverly Hills to come on so we can see what prompted that biting remark. Well…actually, I think I know.

Glanville had it pretty rough last season. She was just coming out of her very public and nasty divorce with ex-husband Eddie Cibrian, who was “stolen” from her by country-crooner LeAnn Rimes. She had injured her foot and was hopping around on crutches. She was attacked by the other housewives by being called a “slut pig” and “white trash.” And on top of that, the two wicked sisters of Beverly Hills (Kim and Kyle Richards) hid that poor lady’s crutches, prompting Glanville to hobble around until she found them. Awwww, poor little tink-tink, hopping around like a bunny rabbit in bedazzled crutches and one stiletto heel. Maybe she was sick of being bullied and ridiculed and wanted to start this season with a “don’t f- with me attitude.”

And don’t forget the humiliation and embarrassment her ex-husband and LeAnn Rimes put her through. Glanville and Rimes pretty much have had a pretty contentious relationship in the tabloids and especially on Twitter. But it seemed, for a while there, that they were being at least cordial to one another.

And then Rimes did her interview with Katie Couric on ABC, admitting to the world stealing Cibrian from Glanville and being proud of it. I’m sure Glanville didn’t like hearing that, and went on Twitter to subliminally tweet to Rimes:

By which she is referring to Rimes’ stint in rehab for “stress and anxiety”. How is there even a rehab for stress? Can’t you just go to a spa for a couple of days? Mud baths works wonders.

All I can say is, Rimes, Foster and any of the other Real Housewives of Beverly Hills better watch out for Glanville. She isn’t playing around this season and I have a feeling she’s just going to get nastier and nastier.

What do you guys think? Has LeAnn Rimes hardened the heart of Glanville, making her lash out at her Real Housewives co-stars? Put your thoughts below!