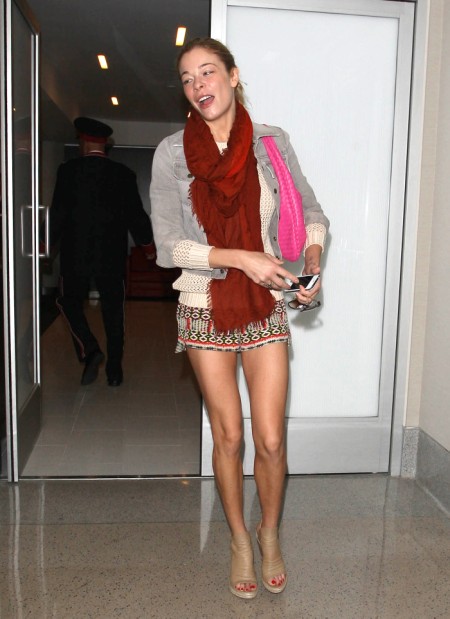 LeAnn Rimes has given her first interview since leaving “rehab.” The only shocking thing I see from the previews of her exclusive chat with Katie Couric is how shockingly easy Couric goes on her. She was a journalist once, right? She tosses easy questions to the deluded Rimes and they chat happily about LeAnn’s life with hubby and fellow adulterer Eddie Cibrian.

From the clips I watched, Couric is no more a journalist than Rimes is a realist about her personal life. LeAnn decided the day after she turned 30 to go to rehab for “stress and anxiety.” Celeb Dirty Laundry reported that she’d gone off the rails and was attacking Twitter followers for dropping her. Sure, that’s sane…

Other sources speculated that Rimes’ stay in rehab was for drugs, alcohol or an eating disorder. But LeAnn told Katie, “I was unhappy and stressed and wanting to lead a happier life.” Rimes then added, “I had the opportunity to start all over again.”

I hate to tell you this honey, but a stint in rehab isn’t going to make you a new woman. You stole someone’s husband and invited a whole lot of grief in your door when you did it. Unless you’re going to give him back, there’s no starting over…

Couric asked her how married life was treating her and LeAnn – married last year to Cibrian – said, “It’s good. I have a really great partner in crime.” In most states adultery isn’t a crime any more, but you get the idea… For a songwriter, she should choose her words more carefully!

LeAnn goes on to brag about her family saying, “We have two wonderful kids” (then a lengthy pause) “of his, half the time.” Seems like LeAnn’s co-opted the kids, too. What’s next? Will LeAnn go Silence of the Lambs on Brandi and flay her so she can wear her skin? Perhaps that’s why Rimes lost all the weight – so she could squeeze into Glanville’s pin-thin epidermis…

LeAnn waxed rhapsodic about stepsons – 5 year old Jake Cibrian and 9 year old Mason Cibrian – adding, “I love them to death.” Apparently not enough to leave their family intact – she just had to steal their Daddy and crush their Mommy. What’s love got to do with it?

The clips showed some of the chat about what precipitated her decision to go to rehab and LeAnn said, “I really just had to take a stand for myself.” Boo-hoo. Seriously?

Then LeAnn again mentioned, “How many people get to start over again in this day and age?” No one. Not a single one and certainly not you LeAnn… You will forever be remembered as a cheating husband stealer. I personally don’t care – it wasn’t my husband.

But LeAnn, know this, your Wikipedia page will always mention you’re a cheater. Edit it all you like, someone will always rewrite the truth there for all to see in black and white. You made your bed with someone else’s husband and now you have to lie in it. There’s no clean slate in sight for you.

I do have to give credit to Eddie’s jilted ex Brandi Glanville – after a Twitter war and repeated public dissing of LeAnn after she stole her husband away – she was classy enough to give her a supportive send off to rehab.

Brandi issued a statement saying, “I totally support LeAnn’s decision to enter rehab — my top priority is my children, and at the end of the day we are a family… LeAnn is their stepmom, and they love her. I am wishing her all the best and I hope she will find what she is looking for while in rehab.”

You may look at Brandi’s antics on Real Housewives of Beverly Hills and sympathize with Eddie for wanting out – but she may have been completely sane and sober before LeAnn crashed into her marriage. Who knows?

In another snippet of the interview, Couric mentions the amount of tabloid coverage little LeAnn is getting and asks “Why is that, you think?” Really, Katie? Really? Did you check your journalism cap at the door of this farce of an interview? We all know the answer to that. Until she went cheating and husband stealing, no one gave a damn about her outside of her music.

Later LeAnn says, “There’s been so many lies. I made my choices. You know – I made my choices and I’m living with them.” I agree LeAnn – perhaps if less of those lies had been yours and Eddie’s you wouldn’t have needed a stint in “emotional” rehab to recover from being taunted by all the haters who don’t respect your life choices.

It would also help if LeAnn would keep her private life private. She tweets everything she’s doing all the time! Radar Online reported LeAnn said, “I think it’s really hard to deal with Twitter and Facebook and all these social media outlets.” In case the country crooner is technically inept, I’ll offer some words of wisdom: honey, every device has an off button. And participation in Facebook and Twitter is optional, not mandatory.

Despite it being her birthday recently, LeAnn has to know she can’t have her cake and eat it too. If she wants to put herself out there so prominently and interact with the public, she’s got to take what she invites in.