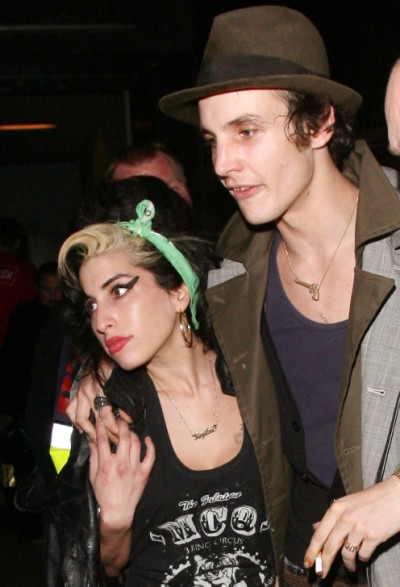 Just a little over a year since her untimely death, Amy Winehouse’s ex-husband, Blake Fielder-Civil, is on life support after being put into an induced coma last Friday. Blake’s girlfriend, Sarah Aspin, told The Sun she discovered the recovering drug addict unconscious that morning and paramedics rushed to the scene to find he swallowed his tongue, choked on his vomit, and was suffering from organ failure.

Aspin explained that Blake had went out the night before and came home slurring his words. She said she suspected he had taken drugs.  The Sun claims Blake took a packet of heroin and morphine, ironically enough, after meeting with probation officials. Blake went to jail in June of last year for burglary and possession of an imitation firearm before being freed with a tag two weeks ago in preparation for his full release.

Aspin and Blake met three years ago while in rehab and have a 15-month-old child together. She told The Sun: “The doctors said they put him in a coma to help him and due to infection. I’m praying he’ll survive, but I’m having to prepare myself that he may never wake up. I am devastated, just devastated, at what has happened. I just want to cry all the time — but I have to be strong for our son Jack. We’d been so happy last Thursday morning and talked about getting married. Blake had a 1 p.m. appointment with the probation service in Morley and said he might be late as he was meeting a friend. He’s never really been a drinker, but when he got home with this friend, he was slurring his words and staggering — I thought he was on something. I was very angry because he’d been doing so well.”

“Doing well” is a relative term for people like Blake unfortunately. A former music video assistant, Blake is best known for being married to Amy Winehouse during her meteoric rise to fame. The volatile twosome married in 2007 but divorced two years later. Their marriage was marred with drug and alcohol abuse and many, including Amy’s father, blamed Blake’s influence for Amy’s downward spiral and ultimate demise.

Is anyone surprised? Hate to say it but I’m certainly not. It’s a shame that he couldn’t learn from Amy’s tragedy or straighten up for his kid at least. It’s almost like he was hell bent on self-destructing. Anyone else think it’s weird that this is all happening around the anniversary of Amy’s death? Just a coincidence or do you think he turned to the drugs again as a way to cope?