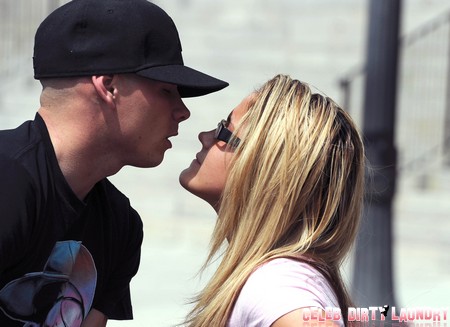 Teen Mom 2’s Jenelle Evans and her ex-fiancee, Gary Head, were back in court today to face charges stemming from an incident at Jenelle’s house on June 24, where an argument lead to Jenelle calling the police and both of them being arrested and charged with assault and drug possession. Both are back now and seem pleased with the results.

“Court is over,” Jenelle tweeted less than an hour ago. “Gary Head pleas guilty to assault on a female and all my charges were dropped.”

Gary’s version? “I plead guilty even though I didn’t assault her. The deal was too good not to pass up,” says the 24 year old Marine.

Why, you ask, would he plead guilty if he did not do it? “Why fight the case and risk time when I can plea guilty and walk with the bargain. Either way we both walked away happy.”

Jenelle herself seems to back up these claims, and noted, “if he didn’t take the plea bargain then he was facing serioussssss consequences,” and also notes that, “he can’t get in trouble for 2 years and then the assault on a female will be dismissed IF he doesn’t violate ANY NC law.”

In other words, so long as Gary stays out of trouble for two years, both will walk away Scott-free.

Meanwhile, Gary maintains his innocence. “I never hit her. I know the truth and a lot of people in the courtroom knew it to.”

So why did Jenelle let him take the plea deal? “The judge said ‘are you sure you don’t want to go further?'” says the 20 year old Teen Mom 2 star. “I said ‘no he can take this plea. I want no contact with him that’s all.”