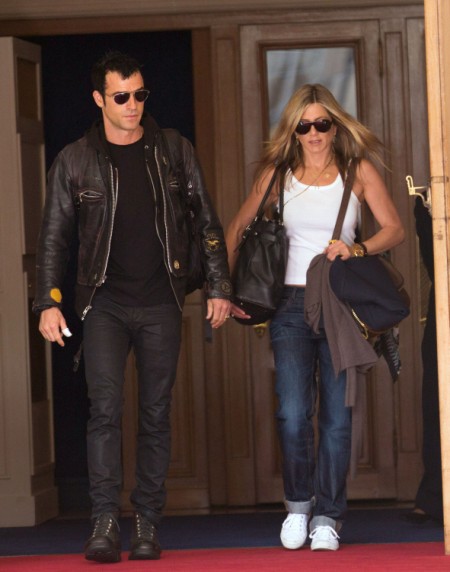 Justin Theroux and Jennifer Aniston are engaged. The actor’s rep told People magazine that Justin proposed to Jennifer on Friday while visiting her on the set of her new movie in Wilmington, North Carolina.

It was Justin’s 41st birthday but he decided to give the biggest present to his girlfriend of more than a year.

“Justin Theroux had an amazing birthday on Friday, receiving an extraordinary gift when his girlfriend, Jennifer Aniston, accepted his proposal of marriage,” his rep told People.

This news might be a surprise to people who thought the couple were already engaged. Jennifer returned from a whirlwind European vacation with Justin this summer sporting a mysterious ring on her finger but stayed mum on her relationship at that time. This is clearly the real deal. Unfortunately, People didn’t get any good info on this engagement ring but we’ll let you know all about it the second we hear anything!

And I have to do it… coincidence that Aniston got engaged when there are rumors Angelina Jolie and Brad Pitt are marrying in France this summer? I’m always bewildered when A-list exes get remarried/engaged/have babies so close in dates. Nick Lachey and Jessica Simpson are having babies within a year of each other. Nicole Kidman and Tom Cruise both remarried in 2006. I know those are only two examples but I swear there are more! It’s almost like once someone takes the plunge then the other one feels like they can/should as well. I don’t know. It’s my theory. I’m working on it!

Nevertheless, congrats to Jennifer and Justin! Do you think the two make a compatible pair? How soon until the pregnancy rumors start rolling?