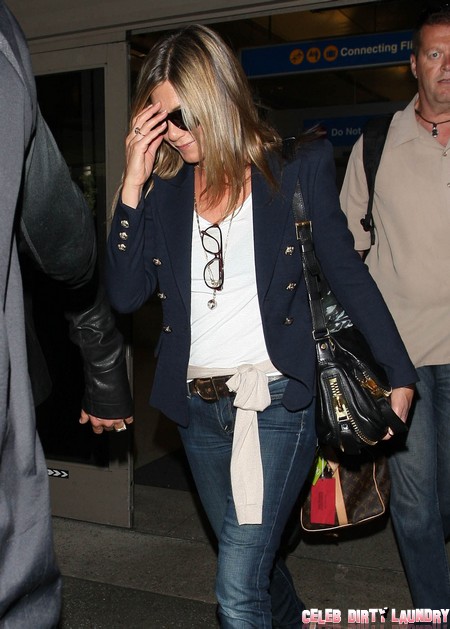 Justin and Jen were in Paris and Rome for their romantic vacation where Jennifer wore a mini-dress and was still allowed into The Vatican. The photos of Jennifer Aniston looks surprisingly coy, like she knows something we don’t and we don’t mean who Carly Simon sang You’re So Vain to, but more along the lines of OMG-I-am-engaged!

We all seem to forget that this isn’t the first time Jennifer Aniston pulled the ring posing. She did it before, with Vince Vaughn, many eons ago, when she wanted us to assume that he proposed. It wasn’t true and Vince Vaughn is stupid.

We have a very, very strong suspicion that Justin Theroux did not “really” propose to Jen-Jen. He was with Heidi Bivens for a full fourteen years and he never, ever proposed to her. We smell commitment issues and it smells like Jennifer Aniston is heading for the Hollywood Hills. Jen-Jen has never really had any luck with her romantic life, after the miserable break up between her and Brad and the slew of men that followed (remember John Mayer?).

If Justin proposed, we can euthanize all those inconsistent rumors of the relationship reaching a rocky road. If he didn’t, we think Jen-Jen is more cray-cray than we thought. Why toy with us like that Jen? What is wrong with you? Why show us a diamond ring on your finger and allow us to assume that you’re engaged? That’s just silly!

What do you think readers? Did Justin propose to Jennifer? Is this more farty than arty? Let us know in the comments below.