Justin Theroux Calls Off His Wedding To Jennifer Aniston! 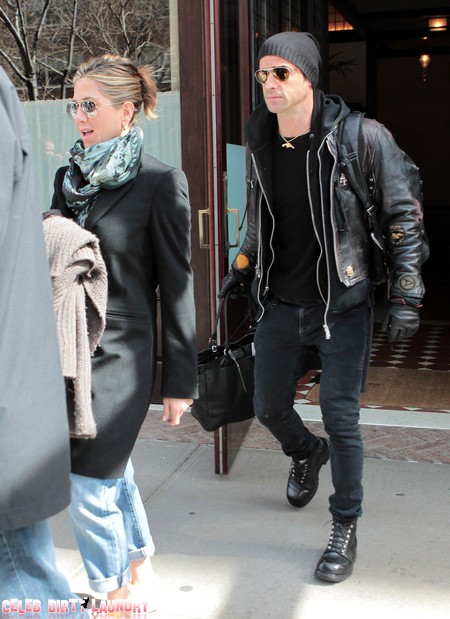 It seems Justin Theroux is sick to death of his girlfriend Jennifer Aniston’s obsession with Brad Pitt and Angelina Jolie and has called off their wedding indefinitely!  Jen is said to have collapsed into tears when she heard the news of Brad and Angelina’s engagement and that didn’t make Justin very happy.

“This was going to be Jen’s BIG year for love and happiness. She and Justin were knee-deep in wedding preparations when Jen got the shattering news that Brad and Angie were announcing their en­gagement and making plans to wed this year.” says a source.

People focus so much on the Jen/Brad/Angie triangle that they all but forget that Justin is in the mix and finally, he has had enough.  Justin completely blew his top at Jen.

“At that point, Justin said it would be best if they indefinitely postponed their wedding plans,” continued the insider. “He doesn’t want to be drawn any deeper into the twisted soap op­era of Jen, Brad and Angie.”

Meanwhile Jen, rather than paying attention to her own relationship, still seems to be focusing on her exes’.

“She wholeheartedly believes that Angie engineered the timing of the engage­ment announcement to Brad to get in another dig. Jen is more furious than heartbroken.  She feels like she’s been stabbed in the back all over again, after enduring the pain of having Angie steal her husband seven years ago.  NOW, Jen wants revenge!”

It’s about time Justin reacted to the fact that his fiancé just can’t seem to step over her past once and for all, in order to be happy with him.  Do you think he was justified to put the brakes on things?  Will Justin and Jen ever make it down the aisle?  Tell us what you think in the comments below!