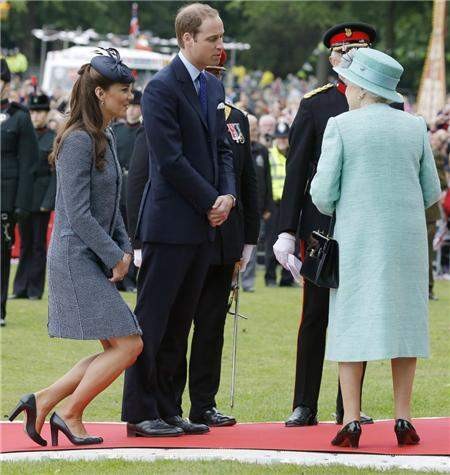 The royals were having a royal time when a new and updated Order of Precedence was decided that Kate Middleton must curtsy to the blood princesses whenever Prince William is not around. Guess who ordered this – Queen Elizabeth II.

The old matriarch (or is it monarch?) has decided that Kate Middleton must always curtsy to the Princess Royal (Anne – only daughter of the Queen and Prince Philip), Princess Alexandra and the daughters of the Duke of York, Princess Beatrice and Eugenie. If Prince William is not present, Kate falls under rank within the royal family and must show respect and reverence to the other members.

Kate isn’t the only one who has to curtsy to someone else under the new rules as The Countess of Essex, Prince Edward’s wife, will have to curtsy to Kate, who holds the title of Duchess of Cambridge. Kate must at all times, whether she’s with Prince William or not, curtsy to the Queen, the Duke of Edinburgh (Prince Philip), the Prince of Wales (Prince Charles) and the Duchess of Cornwall (Camilla Parker-Bowles).

Interesting to note, the Queen’s full name is Elizabeth Alexandra Mary Windsor, even though she almost never uses her last name. The Queen does not need a passport or a driving license. The family name was changed in 1917 from Saxe-Coburg-Gotha to Windsor, due to anti-German sentiment in Europe and the world.

The Duke of Edinburgh (Prince Philip) has “place, pre-eminence and presence” over all men in the United Kingdom, except where provided by Parliament, the Prince of Wales. The Duchess of Cornwall (Camilla) is fourth overall, but is ranked second at official occasions, such as state dinners.

What do you think readers? Is this all a ball of baloney? What is a curtsy anyway?  It is a primitive symbolic demonstration of subservience to one higher born – a show of obeisance based not upon merit or sentiment but upon birth – how disgusting – how un-American – how undemocratic – how WRONG.  It is not conceptually different than kissing the mafia don’s ring. Do you enjoy the tradition of the royals? Let us know in the comments below.