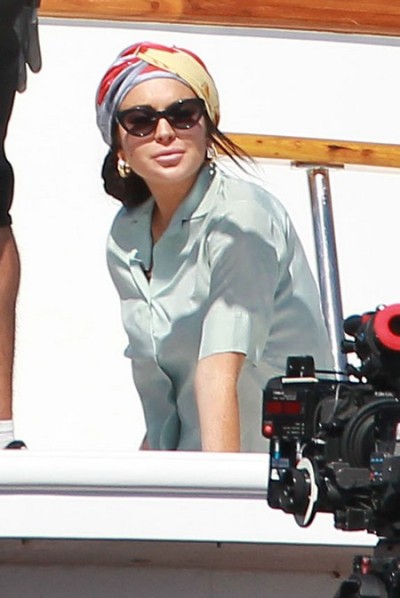 Paramedics rushed to Lindsay Lohan’s aid this morning as she was found “unresponsive” at her Los Angeles hotel room. TMZ reports a hotel staff member could not rouse the star and became alarmed and called 911.

Sources told TMZ that Lindsay has been shooting her Lifetime movie, Liz and Dick, over the last two days and been getting very little sleep. She told a member of the movie’s production team that she wasn’t feeling well and could possibly be suffering from exhaustion and they sent over a private doctor. Before the doctor arrived, he called the hotel to make sure someone checked on Lindsay before he got there. The hotel staff member deemed her unresponsive.

However, by the time paramedics got to Ritz Carlton Hotel in Marina del Rey, Lindsay was apparently fine and they found nothing wrong with her. She didn’t go to the hospital and even went back to the set to continue shooting the movie.

Lindsay’s representative, Steve Honig, told E! News, “Lindsay has been working a gruelling schedule for the last couple of days. Last night she worked from 7 p.m. to 8 a.m. She was exhausted and went back to her room to sleep. Producers were apparently concerned and called the fire department and paramedics found her sleeping but determined that she was fine, just extremely exhausted and slightly dehydrated. She is on her way home now to rest and will be back on set later today.”

Of course he had to add that no drugs or alcohol were involved in the incident since I’m sure that’s what most of us were thinking. I know that popped in my head right away. Lindsay’s had a rough few days. She was involved in a car accident last week that  totaled her Porsche, and created more questions on whether the actress has reformed her wild ways.

Does this sound weird to anyone else? How hard is it to wake someone? Was the hotel staff member just knocking at the door or was he in the room? That makes a big difference. I can understand her not hearing knocking if she was super tired. But would the hotel call the paramedics just because someone didn’t answer the door? I don’t know. We’ll keep you posted. If I know anything about Lindsay, it’s that the first story isn’t usually the whole one.