Brigitte Nielsen Drunk And Passing Out In A Public Park (Photos) 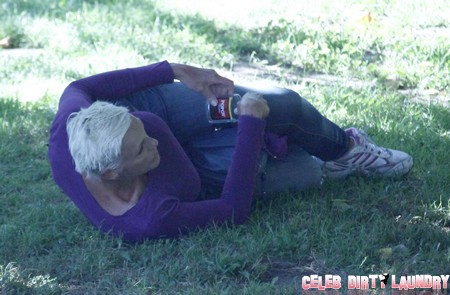 Brigitte Nielsen looks like she has hit rock bottom. The former glamor girl and ex-wife of Sylvester Stallone was drinking straight from a bottle of Popov vodka, chain smoking and stumpling down – all during a drunken casual stroll through a Los Angeles park Saturday. Brigitte is a hard-core alcoholic who has battled her disease for decades and appears to be losing the fight.

It seems remarkable, and yet likely, that there is nobody in Brigitte’s life to help her out.  Okay she drinks – okay she drinks to excess and gets falling-down drunk – but cheap vodka from the bottle in a public park?  This person is in serious trouble.  I mean what do you think could happen to her if she tried this stunt at night, maybe in a not-so-hot neighborhood?

RadarOnline Reports: The Danish actress and model drank directly from a bottle of cheap Popov vodka and also from an unlabeled mini bottle. She smoked cigarette after cigarette, and later stumbled to the grass where she appeared to pass out.

Wearing skin tight jeans and matching purple T-shirt and baseball cap, Nielsen finally left the park by walking through some thick bushes instead of using a pathway.

The scene was shocking for those who witnessed the 6′ tall Nielsen, who looked at least a decade more than her 49 years.

Nielsen had a very public battle with the bottle after her 1987 divorce from Stallone — they were married just two years — and she most recently was in rehab in 2007.

Married five times, Nielsen has been a popular celebrity on the European reality show circuit for the last decade.  She was a contestant on the German version of Dancing with the Stars in 2010 and I’m a Celebrity…Get Me Out of Here! in 2012.

Brigitte Nielsen looks like a ruby with money.  Yes, I know, that’s a contradiction, but still – look at the pics!  This lady’s insides must look much worse than her somewhat ravaged face – her organs can’t sustain her long at this rate.  If there is anyone in Brigitte’s life who still cares then  NOW is the time to intervene.

Somewhat ironically Brigitte’s tell-all autobiography is titled: ‘You Only Get One Life.’   Perhaps she better start thinking about that – if she ever sobers up sufficiently to think.

Actress Brigitte Nielsen has officially hit rock bottom, she was seen hanging out and getting drunk in a park in Los Angeles, California on August 4, 2012. Brigitte pulled a bottle of Popov vodka out of her back pack and drank straight from the bottle while laying in the grass. After she had polished off her liquor she snuck through some bushes to get home instead of walking out of the park like a normal person.