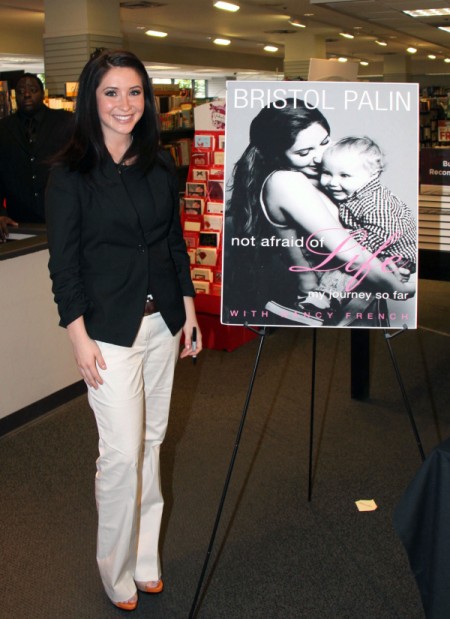 If Bristol Palin was hoping to get more viewers to watch her fledgling Lifetime reality show by brewing up a little controversy she might have taken a step in the despicable, wrong direction. In a recent episode of Life’s A Tripp, Bristol and her sister, Willow Palin, appear to laugh when Bristol’s son, Tripp, calls his aunt a “f-ggot”.

Sarah Palin’s grandson had a hissy fit when his mom and aunt didn’t let him go down to the hotel pool. Bristol nixed the idea telling him it was his bedtime and that the pool was fool of “drunk teenagers”. Hmm, she might know something about that. Tripp freaked out so much he told them he hated them and when Willow picked him up and threatened to send him to his room he struck back with, “You f-ggot!”

The sisters looked at each other in shock and covered their smiles with their hands. I can’t honestly tell if they thought it was funny or they were just so embarrassed the camera caught it. I laugh when I’m embarrassed too but I’m not going to defend Bristol here. Her first reaction should have been to smack the smug look off the kid’s face after he uttered the gross word. Because, really, how the hell does a four-year-old know that word anyway? Kids are sponges. He had to have heard it enough to be able to mimic it in a derogatory way. Clearly, he doesn’t think the word means awesome or cool.

Bristol later tried to minimize the damage and told the cameras, “I’m doing a terrible job disciplining Tripp.” You think?

Gawker made a good point in wondering how a network that makes much of its money off powerhouse, gay-friendly shows like Project Runway and Dance Moms could stand by and let this go without any statement. “Look, kids say the darndest things, and it’s kind of funny when a child curses. But there’s a difference between a precocious utterance of ‘f-ck’ and a homophobic slur. The complete lack of shame is especially embarrassing given that there were cameras filming it all — gay-friendly Lifetime cameras, no less.”

Gawker reports that the Life’s A Tripp showrunner, Matt Lutz, wrote in to say that Tripp’s bleeped expletive was “f-ck” and not “f-ggot.” Lutz said that he was in the room at the time, and that he has reviewed the raw footage several times. Well, I supposed that’s better but I’m not sure I believe it. Seems a little late in the game. What do you think? Did Bristol handle the situation to your liking? Is this just harmless kid behaving badly stuff or majorly disturbing?