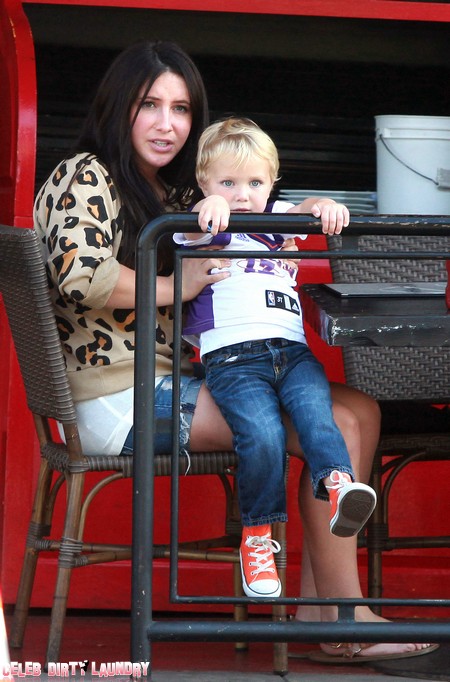 Bristol Palin is definitely NOT America’s sweetheart, so her new ‘reality’ show ,”Life’s a Tripp,” was going to be an uphill battle right from the start. Not too shocking that the critics are crucifying this mess of a show.  Trying to portray Palin as a normal young mom is a joke and a half.

This girl has been handed everything and she certainly didn’t leave her built-in sense of entitlement behind in Alaska. The very first episode has Palin moving into a pre-fab mansion in Beverly Hills with her sister Willow Palin and son Tripp.

Bristol tries “really” hard to convince everyone that she is just a well-rounded normal mother! The show is promoting Bristol as “America’s most famous teen”, famous for getting knocked up at 17 and becoming a single mom maybe, but nothing else.

Bristol is the oldest daughter of controversial politician Sarah Palin, 2008 Republican vice-presidential candidate. Now getting pregnant at 17 worked out in more ways than one for Bristol, as she not only starred on “Dancing with the Stars” but she was able to snag herself a lucrative career as an advocate for pregnancy prevention claiming her pregnancy was an “accident.”  Here’s a clue Bristol, don’t have sex without prevention and you won’t get pregnant, it’s as simple as that.

Bristol is a skank who got drunk, had sex in a tent, and got pregnant – end of story.  Oh yes, let’s not forget that Bristol bought herself a new face and body with plastic surgery.  I have to say that it is hard to be more disgusting than Kim Kardashian – but Bristol manages to pull it off!

If you enjoyed seeing Bristol on “Dancing with the Stars”, her newest attempt at reality TV, follows her as she moves from hometown Wasilla, Alaska to a Los Angeles mansion owned by a family friend, and back again, with young son Tripp in tow.

Upcoming episodes will see Bristol holding nothing back when we see her deal with ex-fiancé Levi Johnston, her family and being a single mom.

According to Yahoo Shine: “The critics point out that Bristol’s parenting challenges aren’t quite the same as most people’s. Her childcare issues, writes Robert Lloyd in The Los Angles Times, “stem from not wanting to hire ‘some random baby-sitter,’ not from a lack of wherewithal.” Lloyd also points out that we see Bristol and Willow shopfor groceries and clothing, “without Tripp…presumably looking after himself back at the mansion.” Lori Rackl of the Chicago Sun-Times notes that “The trio move into a Beverly Hills mansion where Bristol has to teach Tripp things like the difference between a bidet and a water fountain. No one said being a single mom was easy.

Perhaps more disturbing for fans of the adorable, scene-stealing Tripp, Bristol’s son with her teenage-years boyfriend Levi Johnston, is the single mom’s willingness to torch Tripp’s dad on national television. Alessandra Stanley, reviewing the show in The New York Times, writes that “the show’s promos show Bristol putting Johnston’s memoir ‘Deer in the Headlights,’ on a range and firing at it with a rifle, saying, ‘This is for all the single moms.’” Stanley says that “Much of the narrative revolves around Bristol’s attempts to shame her ex-boyfriend into seeing his son.”

It’s obvious a lot of important things are cut out of this show, like when Bristol and Willow shop alone, I’d have to assume that Tripp is with a quickly found sitter, right?  Or the fact that the show’s concept was stolen from the Massey Brothers! The Washington Post slammed this mess saying, “Even if you have a lasting grudge against all things Palin, there’s no payoff here. It’s a new low for anyone who makes the mistake of watching.”

Of all the snippets on this show that I could find, I think Entertainment Weekly really nails it:

“Whatever you were expecting from Bristol Palin’s reality show, I can’t imagine that anyone was expecting Life’s a Tripp to turn into one of the weirdest — and most uncomfortable — reality shows in recent history. Because the show is not a catchy piece of pop propaganda like Sarah Palin’s Alaska. Nor is it a “My Funny Famous Family” riff on The Osbournes. Nor is it a show about the struggles of parenting, like Teen Mom or pre-controversy Jon & Kate Plus Eight. Instead, the season premiere of Life’s a Tripp saw Bristol Palin trying to go full Kardashian, to pitch herself as a character that is simultaneously approachable and decadent. She failed, quite visibly”.

So tell us, have you tuned in to watch even a few minutes of Bristol Palin’s fiasco?  What are your thoughts if so?  If life is a trip we wish Bristol would take a very very long one to a very distant location.