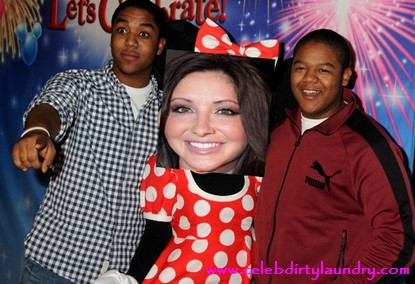 My favorite Disney star ever is Kyle Massey. He and his brother Christopher Massey, say that they created Bristol Palin’s new reality TV show, ‘Life’s A Tripp‘ and just as the project was ready to go, they were cut from it at the very last minute.

The brothers have even filed a law suit in Los Angeles federal court, they claim that they met Bristol during Kyle’s time on “Dancing with the Stars” and came up with the idea for the show back then. The show was supposed to be about having both brothers helping Bristol with her challenges in life taking care of her son in L.A.

Both Massey brothers even came up with the name of the show “Bristol-ogy 101” and claim that a producer of the show, David McKenzie, in fact just stole the project and cut out the two then renamed the show to “Bristol Palin: Life’s a Tripp” which has already premiered.

The Masseys are looking for a ton of money for them to get over this, they want $500,000 that they have gotten to star in the show and a cash pay out for coming up with the idea all together. If that’s not enough, they even want the judge to completely shut down “Life’s a Tripp”.

If I was in the same position as both of the Massey brothers I would completely flip the f*ck out, how in the hell do two people put so much work into creating a show with such a dumb b*tch like Bristol Palin and get nothing out of it? It doesn’t make sense at all, them being the ones to come up with the idea and end up being thrown off the project at the last minute. It’s sad, I like Kyle Massey as an overall actor and it would have been cool to see him back on T.V. again on a new show, even if that b*tch was in it.