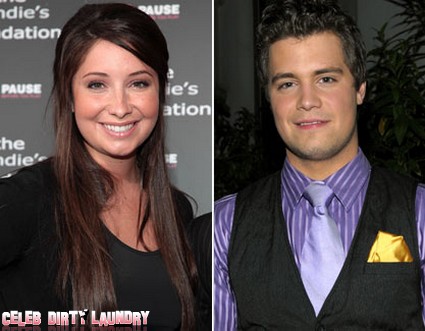 Remember that douchebag who knocked up Bristol Palin a couple of years back and then split not long after their son was born? Well – he’s going to be a Dad again. Levi Johnston‘s current girlfriend is expecting their first baby together.

According to TMZ… 20 year old Alasksan school teacher Sunny Oglesby is carrying Levi’s child. The pair have been together for just over a year. Sunny is only in the early stages of pregnancy. She’s less than three months. Because she’s not showing yet Levi hasn’t told many people. In fact – he hasn’t even told Bristol!  But those who are in on the secret say he’s ‘excited‘ about their new addition to the family. The baby will be a half brother or sister for Bristol’s son Tripp Johnston who is four this year.

Of course no one – including the Palins – will be surprised by this latest turn of events. Levi royally screwed over Bristol – not once but twice! They have two broken engagements behind them. The last time they split was because he thought he was another woman’s baby daddy. Has this guy heard of contraception? His motives were always in question for the controversial Palins and after their last split Bristol told People ‘He’s just obsessed with the limelight, and I got played‘.

Levi’s illustrious career – apart from fame whore – includes posing for Playgirl, mouthing off about his former Mother-in-law to be Sarah Palin and running for Mayor of a town in Alaska. He’s a real catch. Good luck Sunny!