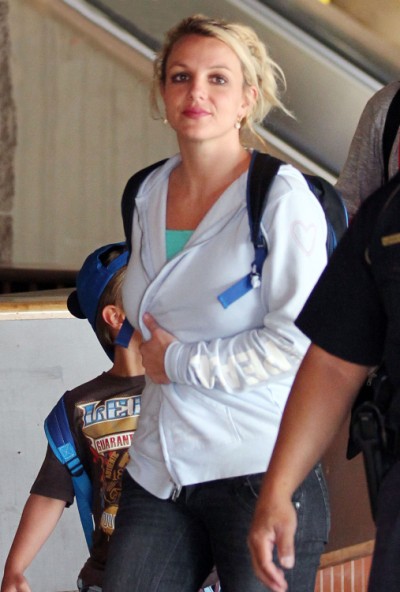 She’s done fightin’ y’all! Britney Spears settled with a former bodyguard who claimed the Oops I Did It Again star sexually harassed him while he worked for her. Naturally, he also claimed she abused her children, Sean Preston and Jayden James Federline.

TMZ reports Britney agreed to throw money at Fernando Flores so he would just leave her alone and end their embarrassing two-year battle. Flores told the court Britney would intentionally drop things on the floor so she would have to lean over and pick them up in front of him, exposing her “uncovered genitals.”

Gross. But believable since it’s Britney Spears and I tend to believe anything crazy where she’s concerned.

Flores also claimed he was summoned by Britney to her room and when he showed up she was just standing there naked. After a rather awkward pause, Britney asked him to get her two bottles of 7 Up. Now that I certainly do NOT believe. Britney would never drink 7 UP. She’s a go-go juice kind of girl!

Some might think Britney’s settling is an admission of guilt. I doubt it. It’s not like she’s Lance Armstrong or anything! Sometimes it’s just easier to pay people off. Besides, it’s not like she spent a fortune. TMZ said the money “didn’t even cover all of Flores’ legal costs.” So there’s that. Still… if someone said I abused me kids I think I would move heaven and earth to prove them otherwise. Who wants that label on their record? And why did this case drag out for two years? Are you a little weirded out by these turn of events? Is it naive to think the truth would have easily proved her innocent if she was? Are you still going to watch her on The X Factor? I totally am!