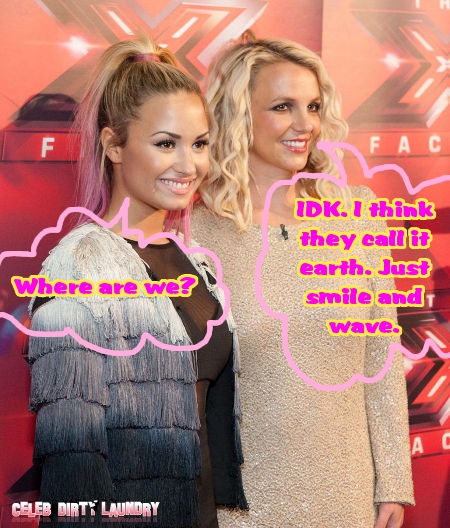 Britney Spears and Demi Lovato appeared to be missing their X-factors at the San Francisco auditions for the hit reality singing competition, The X-Factor . . . . The two judges showed up with awkward, stone-ish smiles and sported styles that would make the E! Fashion Police barf their Gucci-loving brains out. Honestly, it looks as if they don’t even know where they are! Do they know they’re judging music-industry-hopefuls in one of the world’s biggest singing competitions? The above photo definitely has us wondering.

Britney showed up in an interesting nude dress, which had been glitter-ized and bedazzled to the extreme. In my opinion — the opinion of a dude with practically zero fashion expertise — Britney looks a lot better than our hot-mess-of-a-pal Demi Lovato, who showed up wearing a fringy vest . Apparently Demi is sponsored by TopShop . . . so if you want people to give you crazy what-the-hell-are-you-wearing? looks while you’re walking down the street, then Demi’s styles are perhaps your best bet.

What do you think of Demi’s tassel-tastic outfit? How are you liking Britney’s glitter-awesome flesh dress? Let us know in the comments below — and, as always, it’s okay to be honest. Remember, the universe rewards honesty, especially when the celeb world is being critiqued.

This picture does, however, prove one positive thing about the two judges . . . that they share a somewhat cordial — perhaps even borderline friendly — relationship! That’s always nice to see. Whether thanks be to her styling team or to her own devotion, all-in-all Britney looks like she’s been a little more “together” lately. And that’s a wonderful thing — proof that a crazy-crazy truly can turn into a normal human! Maybe a beautiful friendship has blossomed! It will be interesting to see how both Britney and Demi Lovato get along on the show, which premieres on FOX on September 19th.