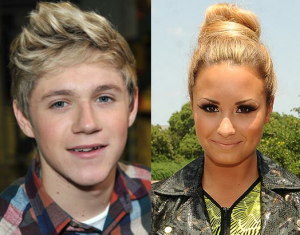 It’s summer time and it is the time for a short-lived fling or a blossoming romance. One Direction’s Niall Horan is rumored to be hot on Demi Lovato’s trail, according to the UK’s The Sun.

His boss is Simon Cowell via One Direction and her boss is also Simon Cowell via X-Factor USA and now rumor has it that One Direction’s Horan and Lovato are now hooking up. Despite both of their busy schedules, it seems as if the two may be in the beginning stages of a boyfriend-girlfriend relationship. But could their busy schedules make it impossible for these two to actually connect physically? Who knows for sure but at this point, it’s good PR for the both of them because now Niall is talking about his relations with the just recently rehabbed starlet.

The Irish singer confirmed that he is indeed flirting with Demi and they even had a mini-date via Skype. I guess that is what you do these days when your schedules are too hectic.

Niall said, “We’ve spoken. She’s a cool girl so I got in contact with her. She’s really nice. I don’t know what’s going to happen.”

Lovato’s back up vocalist Shari Short was present during the Skype date and exchanged a tweet with the One Direction star saying, “NiallOfficial it was nice to meet you over Skype with @ddlovato. Are you going to come to one of our shows in the US this Summer?”

It seems as if Demi wants to do more than just duet with One Direction!

So what do you think? Would Niall Horan and Demi Lovato make a good couple?