Demi Lovato Wants To Duet With One Direction 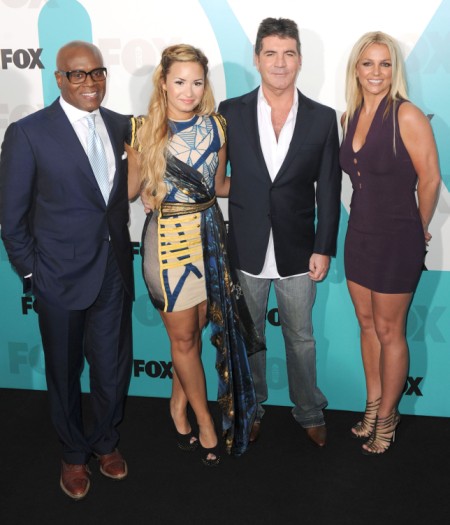 Demi Lovato recently told reporters she would love to duet with super British boyband, One Direction. During a Q & A in Mexico, the new X Factor judge said she’d also like to work with American Idol winner and new fellow reality show judge, Kelly Clarkson. Clarkson has just been picked to judge the newest singing competition on the block, Duets, along with John Legend, Alan Thicke, and Jennifer Nettles.

These singing shows are getting a little ridiculous aren’t they? I could totally see a duet happening with One Direction though. Reality show svengali, Simon Cowell created the X Factor and manages One Direction. It’s definitely in his best interest to cross pollinate his interests. But I’m not so sure about the duet with Clarkson. Cowell might not be too jazzed with Demi making music with the enemy especially after the trash talking that’s been developing between the two shows. Legend recently told E! News that he questions the credibility of new X Factor judges, Demi and Britney Spears. “It’s interesting when people, you know, are judging singing competitions when they aren’t really singers,” Legend said.

Them’s fighting words. Who know about Clarkson and Demi but I definitely don’t see any sweet music being made between Legend and Demi any time soon.

Sure Demi could bypass Cowell and cross enemy lines to sing with Clarkson but would you want to cross Simon? I sure wouldn’t. He’s paying Demi a lot of money to be on the hit show and some might argue her career badly needs this since she just got out of rehab and is struggling to recapture her fan base. She should toe the line for awhile, sing with One Direction, leach off their popularity, get more publicity and then pull a Christina Aguilera and do whatever the hell she wants!