BY Scuttlebooty on May 13, 2012 | Comments: one comment
Related : Christina Aguliera, The Voice 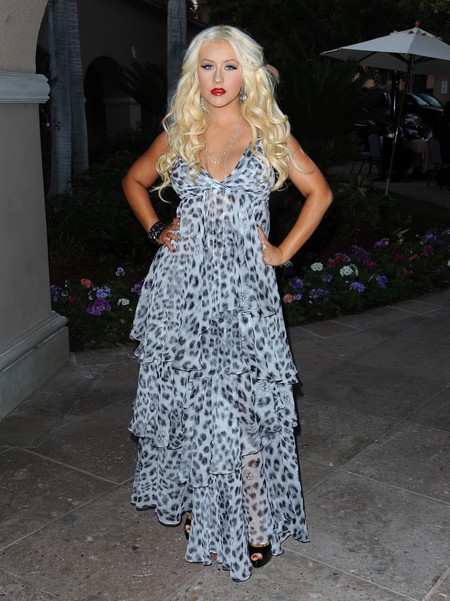 How long does it take to put on a pair of sparkly spankies? If you’re Christina Aguilera – too long. Bosses of NBC’s The Voice are fed up with Christina’s constant lateness and are not happy with the superior and arrogant attitude she has displayed recently.  Execs are threatening to raise her fines in hopes the singer will start recognizing time as more than just a suggestion.

RadarOnline reports that Christina has been fined regularly during the past two seasons of the reality show for being “consistently about two hours late” for filming and producers are over playing Mr. Nice Guys. They are thinking about increasing the fines so they might actually make a dent in the pop star’s wallet.”

“For season three this has got to stop. Whatever her fine is now doesn’t bother her. She has so much money she probably doesn’t notice,” a source says. “Higher-ups on the show want to raise it to a number that does bother her so she actually arrives on time.”

Christina’s tardy for the party antics aren’t just a problem to her bosses. Fellow judges, Adam Levine, Cee Lo Green and Blake Shelton are also annoyed by her disregard for time.

“They can’t stand how late she is,” the source continued. “They know she’s a girl and she takes longer to get ready, but this is ridiculous. And when she gets to set she still has to go through hair and makeup.”

Have you taken a close look at Christina lately? Her face looks like it’s been buried in foundation. Two hours late sounds generous.

Tardiness is just another in a series of examples of Christina’s diva-like behavior on the show. Her public feuding with Levine and blatant dismissal of guest, Justin Bieber, continue to showcase the rather large chip on the 31-year-old’s shoulder. But she can afford to be. Christina is arguably the main talent on the judge’s panel and rests comfortable showing no fear, or perhaps care, over losing her reality show gig. She’s got options.

A source told Hollywood Life: “If The Voice didn’t have her, Simon Cowell would bring her on board The X Factor.”

In that case, I hope Christina starts stumbling in five hours late so she can get fired and move on to Cowell. Can you imagine the amazingness of BOTH Christina AND Britney Spears on the same panel? My gossip-loving heart could burst with the possibilities!