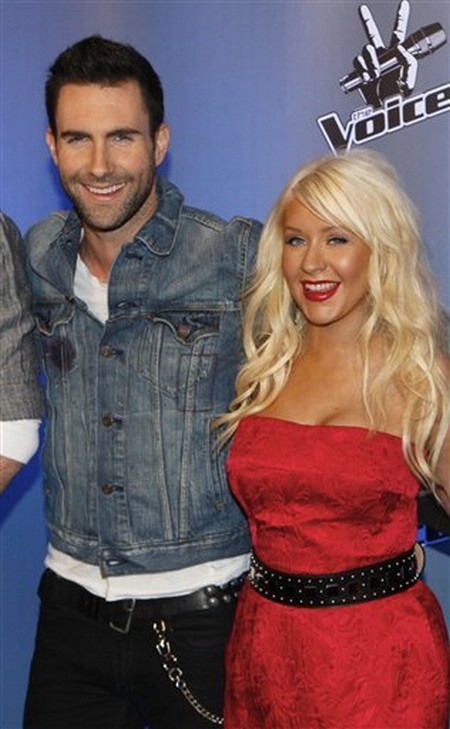 While only four finalists remain on the hit show, The Voice, it’s the judge bickering that has stolen the spotlight this week.  Christina Aguilera and Adam Levine had a war of words at an earlier rehearsal because Aguilera didn’t approve of Levine’s song choice for protégé, Tony Lucca.  Jay-Z’s rap anthem, 99 Problems was deemed inappropriate by the songstress and she and Levine had an ugly fight over it.  Last night, Tony Lucca, an old Mickey Mouse Club acquaintance of Christina’s, did indeed sing that song and Aguilera lashed out,

“Your beautiful wife and your daughter and family are here tonight,” she told Tony, “and I just thought, you know, the lyrical connotation was a little derogatory towards women, but all-in-all, it was good fun.”

Levine of course fired back, “It’s called a metaphor … we’re not referring to women; we’re referring to everything.” Causing Aguilera to snip, “If that’s how you have to get points …”

In the end Levine snidely tried to pacify her and praise Lucca all at one, “I just want say, I love you Christina, but Tony, I thought you did fantastic,” the Maroon 5 singer told Tony, before revealing his undershirt, which read “Team Xtina” in glittery letters.

Aguilera referred to her own protégé, Chris Mann “a real man [who] respects women.”

“Adam is making it more about getting at Christina this season and he’s very good at getting under her skin,” a source close to the show tells Radar Online.  He comes off as a really great guy, but he’s very smart the way he takes jabs at Christina. Adam’s very subtle and doesn’t use words, just sneaky actions.

She is sick of the way she’s being treated and she’s disgusted with Adam. Christina really takes it to heart when Adam does these things. She doesn’t know why he does it, she doesn’t understand why he’s being so mean,” the source says.

It seems that the real issue here is that show producers allowed a choice that many would find disrespectful to women in general.  Aguilera thinks she is defending all women and Levine is seeing it as, simply a song.  What do you think? Who do you side with? Tell us in the comments below!