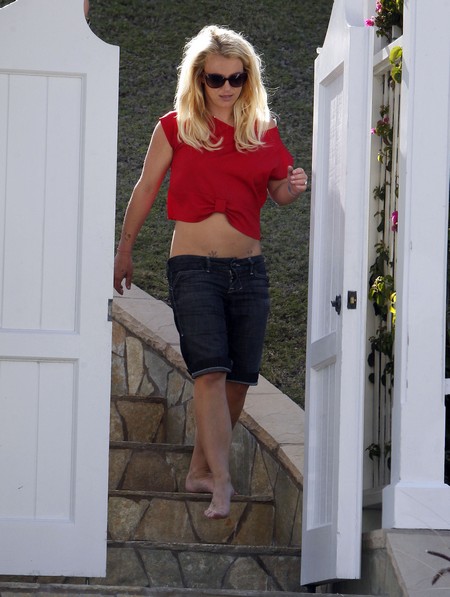 Britney Spears has a big surprise for everyone and it will be announced Monday at the FOX Up Fronts in NYC.  If her co-conservators allow her to speak then Britney will be sharing with the rest of us what we have already know for some time – she will be signing to star on The X Factor USA!

Apparently the deal was not signed as of Friday and there are still some minor issues to be resolved but they present no problems – according to both sides.  What remains unclear is how Britney will be able to handle such an intense and stressful environment – after all she won’t be able to lip synch her way out of this gig.

Perhaps papa Jamie Spears and his partner, Britney’s fiancé Jason Trawick have psychiatric meds going just right now and are hoping she can actually deal with human interactions without flipping out.  Her owners minders must have more conditions in this contract with FOX than Britney has fans.  Will other judges be allowed to speak to Brit?  How about the contestants?

TMZ exclusively reports:  Britney Spears is set to make a big splash Monday by personally appearing at the FOX Up Fronts in New York City for the announcement that she will be joining “X Factor.”

As we reported, as of Friday AM the deal was NOT signed, contrary to various reports.   There were some fairly minor issues that still needed resolving and both sides were hoping to finalize it by end of day Friday or over the weekend.

Britney will not sign the deal because she’s under a conservatorship — Co-conservators Jamie Spears and Jason Trawick will do the honors.  Our sources say … Britney and FOX both think a personal appearance is essential in creating buzz
for the show.

I have to ask – how can an adult that requires the signatures of two conservators to allow her to do anything possibly be competent to be a judge of anything?  This appointment of Britney is simple exploitation – exactly what we would expect from her father and fiancé – and especially from the man who brought us One Direction, the head exploiter Simon Cowell.  Do you want to see Britney embarrass herself on The X Factor?  Let us know in the comments below.